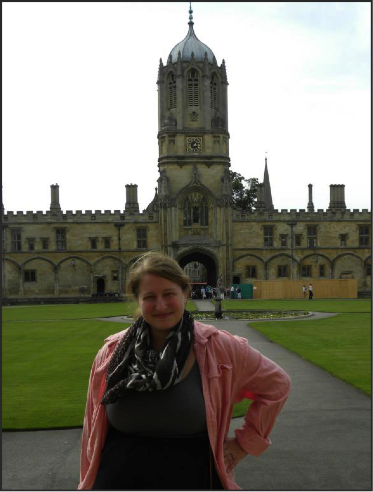 Editor’s Note: Katie Owens, senior English major, is studying abroad for the first time. In this column, Katie will reflect on her abroad experiences in the UK.

When I was a little girl, I always dreamed of going to college. But not just any college. I wanted to go to a college in England.

But, you know how the story goes. Life takes over. As I grew up, my dreams of studying abroad escaped me.

But now, my dreams are coming true. Here I am doing a semester abroad in Oxford. I’m at a small international college called St Clare’s and I’ll be here until December. After a 6-hour flight, I arrived here early in the morning on September 1 with two other Marywood students.

While driving from the airport to town along the highway, England seemed a lot like Northeast Pennsylvania. I saw trees, fields, and hills from my window seat. But as soon as we reached town, it was clear that we weren’t in Scranton anymore. Everything in Oxford is made of bricks and stones. Most of the houses are Victorian or Neo-Gothic and many are covered in ivy.

After going to the school and checking in, I was able to move into my room. I live in a house with about 50 other students, most whom are from the University of San Diego because they have a partnership with St. Clare’s. The other students, however, are from all over the world, including places like Germany, Saudi Arabia, China, and Holland.

My roommate is a Dutch girl on her gap year. Taking a “gap year” is common practice here in Europe. It’s when students take a year off between high school and university to travel or study abroad to figure out what they want to do in the future. Since she’s only 18, it is just like being back at home with my younger sister, only she talks to herself in a different language.

Once I was settled in, I set out to discover the “city of dreaming spires.” It is every bit as wonderful as I ever dreamed when I was growing up. The streets are buzzing with different languages and accents every way you turn. There are bookshops, cafes, pubs, and architecture that leave me breathless every time I look up.

I have quickly learned how to use public transportation that goes beyond a COLTS bus. And, I’m also learning how to use a money system with eight different coins and only four kinds of bills. I’m learning something new everyday and I hope it stays that way until December.

Check back in October to hear more about my UK adventures.