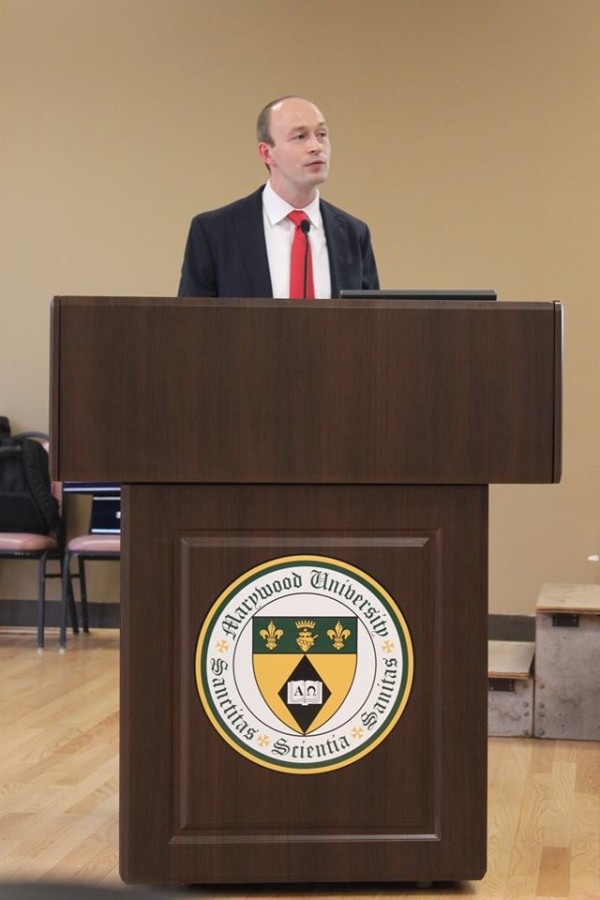 Milan W. Svolik, associate professor of political science at the University of Illinois at Urbana-Champaign, gave a lecture on The Arab Spring to a room full of students and faculty on September 10.

The Arab Spring is a series of pro-democracy uprisings that are currently occurring in the Middle East and Northern Africa. The International Club sponsored the lecture.

Svolik began the lecture with a picture of a hospitalized man in bandages from December 2010. Svolik explained that the man in the picture, Mohamed Bouazizil, was a fruit vender without a permit. A municipal officer demanded a bribe and Bouazizi refused to pay the bribe, so the officer took his scale.

Bouazizi went to see the governor and the governor refused to see him. Bouazizi then left and came back a couple hours later and lit himself on fire. This action united events across the Middle East, which are now known as the Arab Spring.

Protests began in a number of countries. Today, there are two countries that show the hopes and disappointments for the Arab Spring. The first is Syria, who was rebuilding but is now in the midst of a civil war. The second country is Egypt. Egypt held free presidential elections, but today is guided by provisional government and dictatorship.

Svolik stressed that the leaders who are over thrown during the Arab Spring are rare leaders, because their reigns’ last a long time. The average dictator, she said, rarely survives four years, a term shorter than that of a United States President.

“The events are so rare,” said Svolik, “making it hard to test theories and regime changes.”

According to Svolik, dictatorships are hard to study because not many countries admit that they are dictatorships. Some countries claim to have an aspect of democracy but not enough democratic policies that allow them to be fully democratic. China, he said, is an example because it calls itself “the people’s dictatorship.”

“I really enjoyed the thesis related to the Arab Spring presentation,” said Riki Schalb, a senior Spanish and history major. “He also talked about the military, which people try to avoid.”

Svolik took questions after the lecture, which was followed by refreshments. Those who attended recieved scarves.