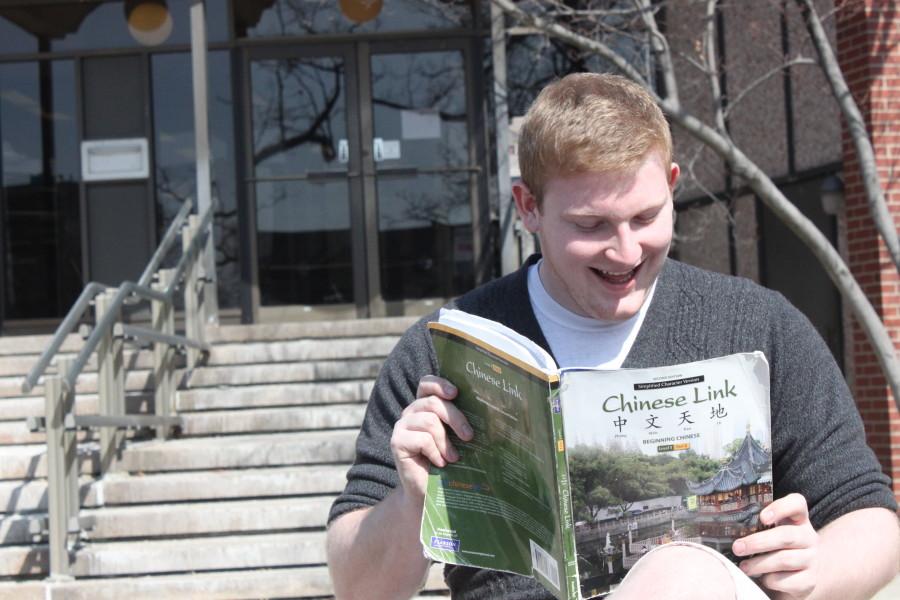 Mike Magistro will be the first Marywood student to spend an entire semester studying abroad in China.

Magistro, a junior Asian studies major, will be participating in an open exchange program between Marywood and Southwestern University,in Chongqing, China.

Magistro took an experimental Mandarin class online in high school, where he says he “fell in love with the language and the culture through the exposure of the course.” It was this experience that prompted him to create an ad-hoc Asian studies major in the fall of 2012 at Marywood.

Magistro took full advantage of the consortium program as a means to create the Asian studies major.

“I created a major that utilized the Chinese language classes from the U of S and combined them with ‘culture’ classes, such as religion, philosophy, history, etc. from Marywood,” he said.

Magistro decided to go to China as a way to immerse himself in the language and culture. He plans to utilize this opportunity to gain the experience he will need to achieve his goals, as he hopes to relocate to New York City after he graduates in order to pursue a career in translation and interpretation.

Marywood is involved directly with approximately 24 institutions in about 10 different countries. However, students have access to institutions in more than 100 countries through the third party programs.

According to Nancy Maloney, assistant director for international affairs, not all Marywood students who choose to study abroad are involved in a direct exchange program such as Magistro. Some of the international programs are administered through a third party program such as the Council on International Educational Exchange (CIEE) and Centers for Academic Programs Abroad (CAPA). These programs allow more options to students than the ones that Marywood has agreements with directly.

“[The program Magistro is enrolled in] is different in that, this will be … an internal program. It will be a direct exchange with Southwest. The idea would be that he will go over there and we would have a student from Southwest University come over to Marywood,” said Maloney.

In addition to studying in China this upcoming fall, Magistro plans to study in Spain this summer. Magistro has been exposed to Spanish for about nine years and considers himself to be mostly fluent in the language.

According to Magistro, he is not anxious, but, is very eager for this new journey.

“This is a once in a lifetime opportunity to be exposed to a culture that appears to be completely alien to ours. While I cannot specify any particular aspect of the culture that excites me most, all I can say is that I’m ready to see it all,” said Magistro.

Maloney said she also considers this exchange to be great for Marywood.

“This is wonderful that we have a student from Marywood going, because that’s usually what the problem is. We’ll have students from China and Korea, for example, that want to come here, but we don’t have students that want to go there,” she said.

Marywood students interested in studying abroad need to have at least a 2.75 GPA and meet any other requirements that the school they are interested in may have. Students looking for more information can visit the International Affairs office at Marywood.edu/studyabroad or the Liberal Arts Center, room 220.