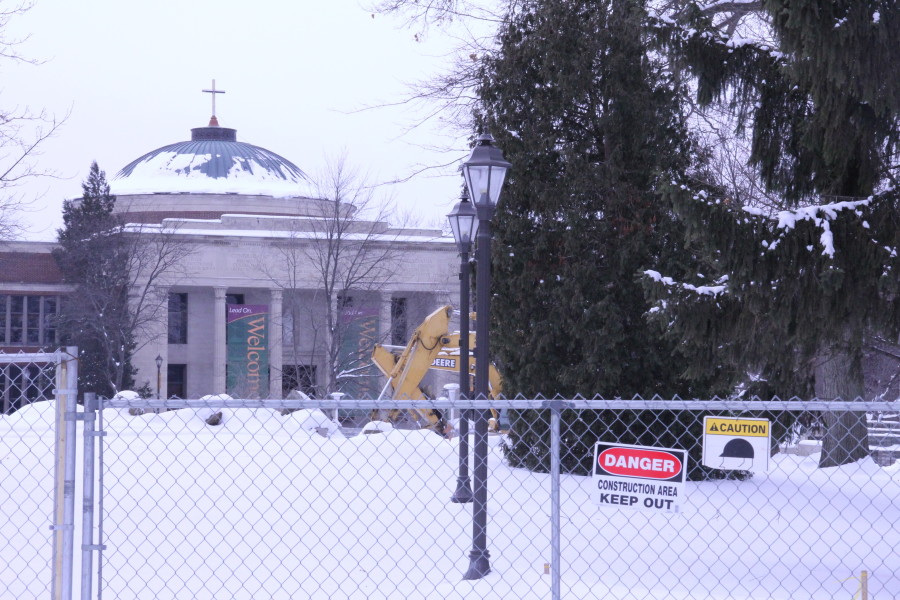 To make way for the new Learning Commons, construction crews were forced to cut down many of the trees around the Memorial Commons.

Mark Burns, superintendent of grounds, did not know the exact number of trees that had been cut down in recent weeks, but shared that he was heartbroken over the loss.

While many were lost, several were replanted around campus before construction began. Fourteen of the trees around the Memorial Commons had been planted in memory of alumni that had passed away. These trees were moved to other parts of campus in the fall. The plaques will be re installed in the spring at the respective trees.

“Liz Connery, director of planned giving, reached out to the families to notify them of the construction. The families were able to choose where they wanted the trees to be replanted,” said Burns.

Students noticed the lack of trees around the center of campus when they returned from winter break.

“I think it’s a shame that they had to cut down so many trees, since it’s what Marywood is known for,” said Keira Logue, junior nutrition major.

“For new things to happen, sacrifices have to be made,” she said. “They had to cut the trees down, but we are getting a whole new building.”

In addition to the new Learning Commons, one of the other projects slated for “A Bold Heart: The Centennial Campaign for Marywood University” is the Motherhouse Memorial Garden. According to Marywood University’s website, “this extensive, beautiful memorial will preserve and reflect a treasured past—one of humble beginnings and hopeful dreams.”

When construction of the Learning Commons is complete, new landscaping will be done. According to Burns, the sustainability committee is set to receive grants for the Centennial year. The plan is to put that money toward planting some new trees around campus.