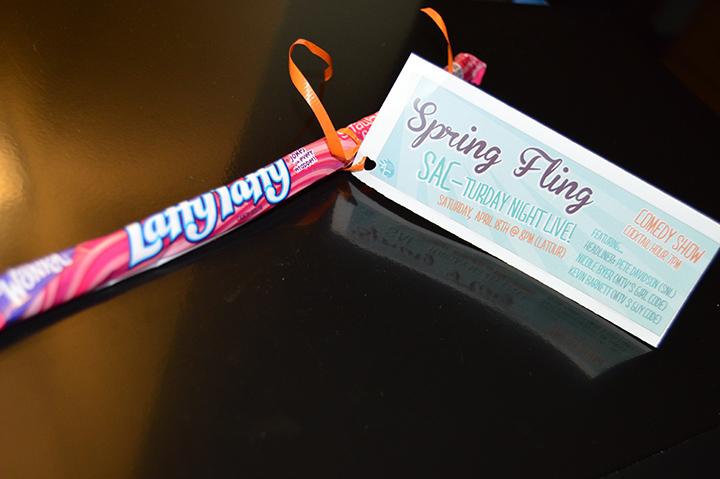 SAC handed these candies out to promote the Spring Fling event.

SNL is coming to Marywood. SACturday Night Live is, anyway.

In the beginning of March, the Student Activities Crew (SAC) posted a picture on its Facebook page, asking viewers to guess who would be coming to the event. Each day, a piece of the picture was revealed and viewers were able to comment their guesses. The picture’s caption read: “Curious about Spring Fling ’15? We’ll give you a hint. Keep checking back as more and more of our Spring Fling details are revealed. Comment your guesses below!”

“I don’t really know what to expect,” said Southard. “But I’m so excited that at a small school like Marywood we were able to get known comedians to participate.”

SAC revealed the celebrities’ identities on March 18, a month before the event. Some people’s comments on SAC’s Facebook’s photo were disappointed while some were excited.

Assistant Director of Student Activities and Leadership Development, Kimberly Coleman, said they changed Spring Fling from a week-long event to a single day a few years ago. “Last year happened on one day, which was a bigger and better turn out.”

Coleman said this year’s Spring Fling will take place on a single day rather than continue for a week. Because of tight budgets, the one-day event allows for a bigger event, like bringing celebrities to campus.

The night will kick off with a cocktail hour with hors d’oeuvres at 7 p.m. The comedy show will start at 8 p.m. and will last for about an hour. T-shirts will be given out, and a chance to get pictures taken or autographs with the celebrities will also happen.