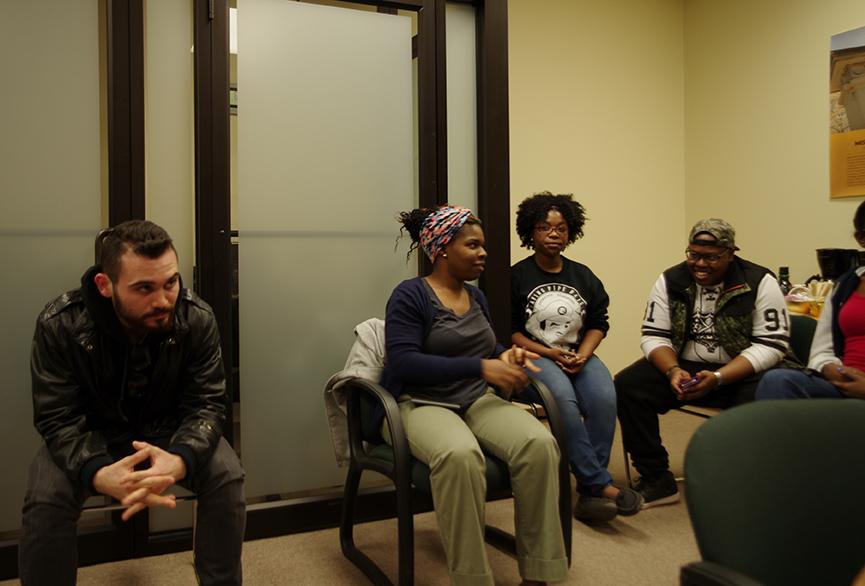 The facilitators of Tea Talk invited members of the Marywood community to the Liberal Arts Center Room 224 from 4:30 p.m. to 7 p.m. to participate in a respectful conversation about issues of diversity, such as the portrayal of minorities by the media, and ideas and thoughts on how to better unite people of all races. Participants also had refreshments.

Tiffany Murphy, secretary of the Diversity United Club, facilitated the event. Murphy is a graduate student pursuing a master’s of social work and is also an intern at the Diversity Office at Marywood.

“I wanted to do something meaningful,” said Murphy. “I wanted to allow people to reflect on Black History Month and the history that is being made right now through the cases of Trayvon Martin, Michael Brown, and the I Can’t Breathe campaign.”

Though Murphy planned to discuss events and societal trends that were pertinent to Black History Month as well as play games and view video clips throughout the evening, things did not go exactly as planned.

“The evening exceeded my expectations,” said Murphy. “People of all different backgrounds and different ages attended and all were able to express their ideas with others. Games were not played, because fortunately the discussions flowed and everyone was able to give their ideas and opinions of what has and is happening in the world. ”

“In today’s world, there is a lack of understanding as to where people come from,” said Watson. “We have to know our history and where we came from. If we don’t know history, we repeat it. Without history, there is no appreciation of all we have today.”

Mental health and counseling graduate student Alan Craig decided to illustrate a way in which people could better know their history as well as get along with others.

“My answer is this: we are sitting together, having a peaceful discussion. If this were to happen throughout the country, things could get better,” said Craig.

“When we protest or talk about things, it can be complicated due to sensitivity issues,” said Ali. “Situations should not be a race problem; [they] should be a humanity problem. We should all work together and solve issues through education so we can move past societal problems.”

Overall, Murphy said she considered the session a success.

“I would like our world to know that diversity means inclusion of all persons and all races,” said Murphy. “Everyone has a turn in voicing their opinions, their needs, and yearning to know more about other cultures. Events like this gives an opportunity for everyone no matter what background, to listen to their fellow man.”

La’nae Charles, junior arts administration major, is the president of the Diversity United Club and was ecstatic about how well the Tea Talk went.

“The purpose was to gather people together in a comfortable setting where we would all be able to speak about issues minorities face,” said Charles. “My hope was that everyone who came would leave with new knowledge and this hope was realized. It was our first time doing this, and we do plan to continue with Tea Talks or events of a similar design.”