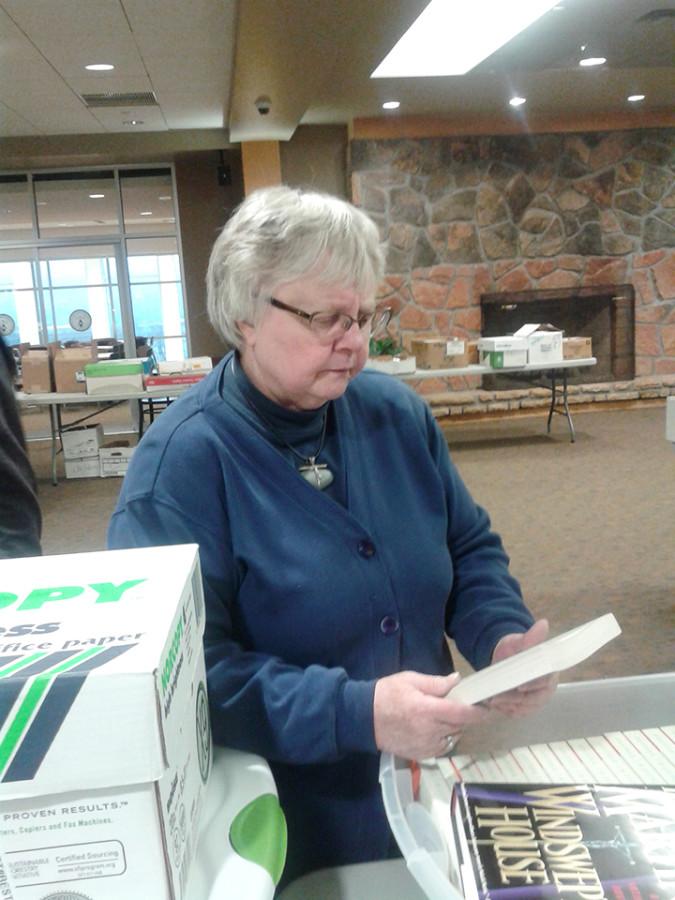 Dr. Bush cleans up books at the conclusion of her final Book Swap on March 26 in the Fireplace Lounge.

In just a few short weeks, students will be heading home for the summer to relax and recharge for another year of learning. While most students will come back to school in the fall, some members of the faculty and staff will not.

Thirteen faculty and staff members have or are set to retire this academic year.

Dr. Ann Marie Bush, associate professor and former chair of English, is one of them.

“I’ve been at Marywood for 16 years,” said Bush. “Perhaps my fondest memory is of the students who come into their majors on their own and really learn and grow from their years here.”

Bush has taught many students with her characteristic humor, wit, and wisdom. She’s also responsible for organizing the semi-annual Book Swap in the Fireplace Lounge.

“She cared a great deal about the center, the children, and the parents,” said Judy Sepinski, secretary for the Fricchione Day Care Center. “She really put her heart and soul into the program.”

Though a clean campus is something many take for granted, maintaining a university takes a tremendous amount of effort. Much of the cleanliness on campus can be attributed to Alice Grimm, Joann Lucke, and Bernard O’Malley.

For nearly 10 years, Grimm dedicated herself to cleaning various buildings on the Marywood campus. The Rotunda in the center of the LAC as well as classrooms in the LAC have been maintained by Lucke of the Housekeeping Staff. Originally a part of the building maintenance team, O’Malley became a part of the Housekeeping Department and served for 25 years. All three will retire this year.

Two members of the community who retired in January of this year are Patricia Trojanowicz and Patricia Kurilla. Trojanowicz had been a member of the Communications Arts Department for 31 years and Kurilla was secretary for the Psychology Department for 13 years and mainly worked with undergraduate students.

“Pat [Kurilla] was very likable and good to work with,” said Beth Graziano, a secretary in the psychology department. “She loved to travel and went to various European countries over her summer vacations. Pat is warm, caring, and helpful and was a friend to many faculty and staff.”

For 47 years, Dr. Mary Elizabeth Malloy Kenny served as a French professor in the Foreign Language Department. After graduating from Marywood University, Dr. Kenny came back to Marywood to teach others French.

“She is a very open, friendly individual,” said Dr. José Reyes, a Spanish professor at Marywood. “Dr. Kenny has great care for everyone, especially students. She participated in Foreign Language affairs and was very active in the Marywood community.”

Marywood’s music students as well as community members who benefit from Marywood’s music programs such Children’s Choir, Summer Music Camps, and the String Project will certainly remember which Sister Joan Paskert, IHM,  the founder of these groups. Her development of the musical programs at Marywood as well as her dedication as a professor will be her legacy at Marywood.

Those who have taken Ethnicity and Diversity from the year 1985 until now have most likely been taught by the dynamic duo of Michael Freund and Dr. Kathleen Munley. A social worker and Doctor of History, respectively, Freund and Munley have dedicated years of service to the Marywood community.

“My 47 years here have been a very nice experience,” said Dr. Munley. “Watching my students prepare for careers is one of my fondest memories of teaching. It is truly rewarding to feel a part of a student’s academic and professional career.”

“I have been teaching for 44 years,” said Freund. “It is bittersweet to leave, but the time has come. I am grateful for the numerous relationships I have developed at Marywood University. As for my retirement, I look forward to spending time with my grandchildren and for what anyone wants: a happy life and good health.”