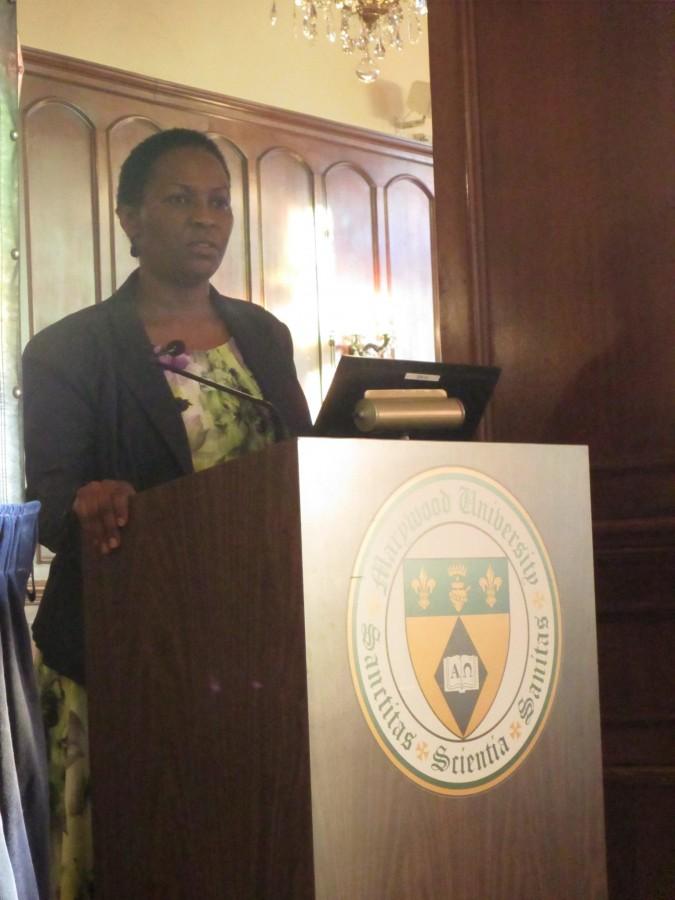 Visiting Fulbright scholar Catherine Kanabahita Guma speaks to the audience about her work.

The Uganda native’s lecture comprised details of her accomplishments in pioneering women’s education in Africa and how she championed her cause in the face of adversity.

In addition to Guma’s lecture and the awards, the event featured a table with information about the African Sisters Education Collaborative (ASEC), a program that aims to “facilitate educational opportunities for women religions in Africa,” according to an information pamphlet from the table.

“We also thought this would be a wonderful way to highlight the ASEC at Marywood,” said Dr. Samantha Christiansen, assistant history professor, director of the women’s studies program and the Fulbright program adviser for Marywood University. “It’s a profoundly exciting program and definitely something to be proud of,” said Christiansen.

The ASEC program strives to provide an education for women in poor and marginalized regions in Africa. Students learn both on-site, online and some students complete their bachelor’s at Marywood University.

Guma’s talk, titled “Gender Mainstreaming in Higher Education Institutions in Africa,” focused on the importance of equal access to education for men and women and the importance of gender equality in society.

“In higher education, like many other institutions, it is mainly patriarchal,” said Guma. “We engage with new policies and curriculum development and bring in new girls and boys from marginalized areas.”

During her journey in providing women an education, Guma was charged with conspiracy and murder as a way to deter her from eliciting change. The charges were eventually dropped, and Guma continued her work and said, “To make a difference, you will face challenges- expect it.”

Guma discussed how inequality “deeply ingrained in laws and culture”affects all areas of life and makes obtaining an education and equal rights extremely difficult. Guma included a photo of female genital mutilation on her slideshow and stressed the importance of being aware of such horrors.

“Sometimes we have to bring images to the screen to make aware the evils of the world,” said Guma. “We have to make sure the practice of this evil ends.”

In regards to education, Guma considers it to be “the master key for reform,” and is “honored to be in academia to influence a change.”

Brenda Staerker-Lewis, a master of social work student, greatly enjoyed Guma’s lecture.
“Her story really moved me- policy is a big thing in social work,” said Guma.” She is the epitome of what it means to change policy in a corrupt country. She’s amazing and brave in ways I couldn’t even imagine.”

There was a point when Guma almost did not apply to the Fulbright Scholarship, but encouragement from her daughter convinced Guma to reconsider.

“I told my daughter [I was not applying], and she backed up into the wall, slid to the ground and burst into tears,” said Guma. “She wanted so badly to go to America and see what she had seen on television for herself. She inspired me to apply.”

Guma is excited at what she has accomplished and encouraged others to join her in her work of facilitating education for others.

“My work here is not at an end; I have much to do,” said Guma. “I hope some of you can take time and give back.”