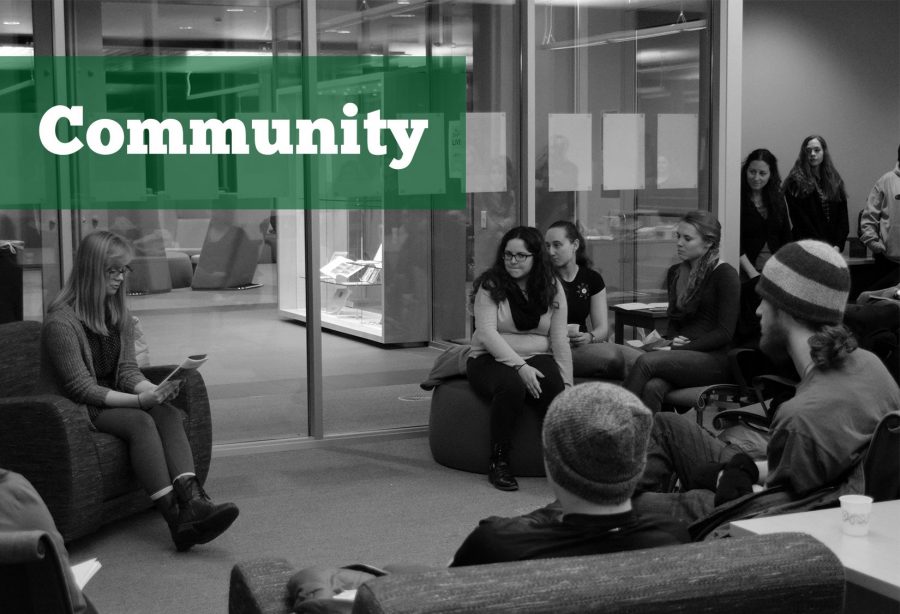 On Wednesday, Nov. 9, a day after America declared their 45th president to be Donald Trump, Marywood University sponsored a safe discussion space to allow students to discuss the election outcome.

Those who wished to talk about the results of the recent election in a non-confrontational manner gathered in the Upper Main Dining Hall of the Nazareth Student Center at 3 p.m.

Michael Kalage, graduate student in higher education administration, said he helped to organize the event because he did not want people thinking they were the only ones grappling with how they were feeling.

“I woke up and I said, ‘I’m feeling uncertain. I’m feeling alone. I’m feeling betrayed. I’m feeling scared,’” said Kalage. “I’m not the only one. There’s got to be some way that we can get to these other students who are feeling this way.”

Since Donald Trump won the presidency, people all across the nation have participated in protests.

“I think [the protests are] kind of ridiculous because [Trump] hasn’t done anything yet. A lot of things people think he can do, he can’t, because there’s checks and balances,” said Kaitlyn Porter, a senior majoring in history and political science.

A key fear frequently discussed at the safe discussion space was about LGBTQ members having their rights taken away.

According to Kalage, “Vice President [elect] Mike Pence, who was a proponent of conversion therapy, which is [a] very, very inhumane, ineffective, dangerous method to somehow cure gay people … and now he’s going to be vice president and have legitimate power.”

According to Politifact, during Mike Pence’s run for Congress in 2000, his website stated, “Resources should be directed toward those institutions which provide assistance to those seeking to change their sexual behavior … Congress should oppose any effort to put gay and lesbian relationships on an equal legal status with heterosexual marriage.”

Although that was posted on Pence’s website, it is unclear if he still stands by that statement today. Still, many are afraid he will try to enforce these ideas as vice president.

“It felt to a lot of [LGBTQ members] like they came second. Their human rights, their safety, their dignity, wasn’t top of the list. And that was hard for a lot of people to understand,” explained Kalage.

With many students fearful of a Donald Trump presidency, representatives from Marywood University groups came to the event to give support, including Student Activities Crew (SAC), the Counseling Center, Residence Life and Campus Ministry.

“It was good to know that the staff and the university is right here with us … all here to help answer students’ questions and ease their concerns and just help facilitate the conversation,” says Kalage.

Counseling Center Director, Dr. Robert S. Shaw, said that resources are available on campus for students struggling to makes sense of the election.

“Anyone feeling stressed about the election outcome is welcome to come to the counseling center, anytime,” he said.

Although some American citizens are devastated by the election results, Donald Trump will be the 45th President of the United States.

“I have hope I think. [Hillary Clinton] mentioned we owe him a blank slate, a free, open mind,” said Kalage. “And he hasn’t done anything yet, so we need to see what he actually does before we panic.”