Joe Biden: From Scranton to the White House 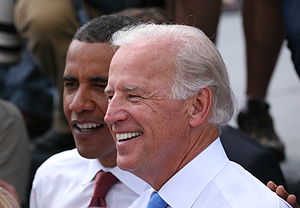 Joe Biden is a true Scrantonian; he was born and raised in Scranton–only two blocks away from Marywood University.  Biden was born on November 20th, 1942 and from there, he began a political legacy.  After Joe moved to Delaware with his family, he studied at the Syracuse University of Law and earned his degree.  While in Delaware, he served on the New Castle County Council.  When elected into the Senate, Biden was the fifth youngest senator in U.S. history.  In 2000, Biden became the senior senator of Delaware and also the longest serving U.S. Senator in Delaware history.

Throughout his history, Biden has worked on bills including the Violent Crime Control and Law Enforcement Act of 1994, which prevents crime and enforces the law.  It provides extra services for more policemen, jails, and prevention programs to keep children safe.  Another bill, Violence Against Women Act of 1994, provides women with enhanced investigations and prosecutions of the violent crimes committed.  It also includes detention of the accused until a fair trial has been given to the alleged criminal.  Additionally, Biden has written the laws of the “Drug Czar,” who controls the drug policies.  Also, Biden re-instated the RAVE Act which helps prevent “date rape” drugs from spreading throughout the country.

Biden has taken huge steps with his power in the senate to improve not only laws, but also help to improve America and keep safe our values and goals for the future as Senator Barack Obama’s Democratic running mate.