Why Would You Want to Become Jane? 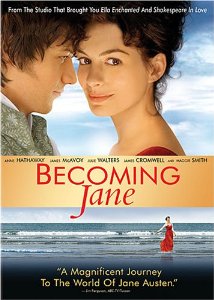 Recently, I viewed the film Becoming Jane. Many did not want to see this, thinking it would be a boring Victorian film about a boring Victorian writer, but these assumptions were wrong; quite the contrary, this film developed a true love story that most can still relate to contemporarily.

To outline the film, it entails a young woman in the 1790’s, Jane Austen, an upcoming writer who sees beyond her surroundings of commerce and gossip—beyond the pride and prejudice—if you will, and looks to marry for love instead of money. Naturally, her parents do not see eye to eye with Jane, and try finding a wealthy and renowned suitor. This parental plan disintegrates when Jane meets Tom, a rough, intelligent, and charmingly arrogant man. Sparks soon fl y and tempers flare.

Jane Austen is conveyed as a strong, independent woman—not easily wooed and knowledgeable that she deserves better than “good enough.” A woman enveloped in the upper class, but more of a common, relatable protagonist, struggling throughout her life to find love and to gain a right to write well.

Director Julian Jarrold did an amazing job in creating a believable world of Jane Austen. Anne Hathaway portrays Austen in an intriguing manner which leaves the audience wanting more, and with James McAvoy as her very mysterious love interest, the film is a hit.

Although this would qualify as a “chick flick,” I give it a big two thumbs up for anyone who wants to run away with their imagination on a romantic adventure for the soul.