Way to Normal: Way to Success 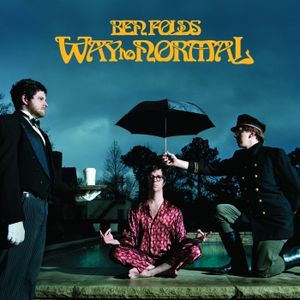 If you thought getting older was enough to keep internationally known singer and songwriter, Ben Folds, from pounding the keys, think again. At 42 years of age, Folds is back with the September 30th release of his highly anticipated third solo studio release, Way to Normal. This album, comprised of thirteen uniquely different songs, may be one of his deepest and well thought out CD’s to date.

Many people do not know how to go about understanding Folds’ rationale. Folds either writes his songs out of mockery or out of reflection of past events, and there is a fine line between the two. When Folds was with his former band, Ben Folds Five, he established a solid mix of serious and relaxed songs. Also, the listeners get a good look into how Folds views some of life’s hardships. “The Bitch Went Nuts”, a brilliant track from Way to Normal, describes how men often view the end of any relationship, jokingly. In one of Way to Normal’s more popular songs, “Cologne”, Folds also conveys the struggles that come along with finally letting go of a relationship, but in a much more serious manner. Not many other singers and songwriters have the guts to look on the brighter side of things.

Prior to the release of Way to Normal, Folds went as far as to create fake tracks and substitute lyrics to anger those who oppose how he expresses his emotions through his songs. Rumor has it that Folds may actually re-master these tracks and re-release them at a later date. This just goes to show just how much spunk Folds has left in him. Listening to a 40-ish, long-time divorcee sing about “Dr. Yang”, “Kylie from Connecticut”, and everything in between is entertaining.

Way to Normal does have a couple songs, though, that do not match Folds’ potential, such as “Effington” and the “Frown Song”. It is unfair to expect a perfect album from any artists, but I feel that these songs are the only things keeping Folds’ album from being just right.

Other than a couple dud tracks and few fake songs along the way, Way to Normal is Folds’ best album to date, next to his 2001 release of Rockin’ the Suburbs. Through this album, Folds finally brings back the talents that he was brought into the business for. At 42, this could have possibly been Folds’ make or break moment, but he certainly fulfilled all expectations and more. Although Folds himself may not actually know the Way to Normal, he definitely seeks the “way to success” through this album and, seemingly, will be doing so for years to come.