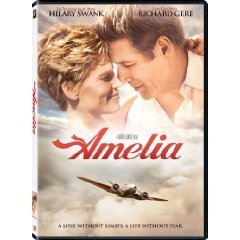 I recently went to see the movie Amelia that just came out in theaters a few weeks ago.  I wasn’t actually sure what to expect because sometimes historical movies are either too drawn out and can be a little boring, or they aren’t at all based on the historical situation.  However, knowing that Hilary Swank and Richard Gere were the main actors in this movie, I had a strong feeling it was going to be a great movie.

Everyone knows the story of Amelia Earhart.  She was the American pilot who disappeared while flying over the Pacific Ocean in 1937 while making the attempt to be the first pilot ever to fly around the world.  Amelia was a strong, driven, and courageous woman who had no fear of taking chances in life.  Hilary Swank, who portrayed the role of Amelia Earhart, was the perfect actress to play this role.  After seeing the movies that Swank has been in, including PS I Love You and Freedom Writers, she is an actress who puts herself into character and makes the viewer believe in the role she is acting.  She has a passion that shows through her amazingly talented work.  In the movie Amelia, Swank portrayed her character perfectly.  She looked the part, and had the energy to become Amelia Earhart.

Richard Gere played the role of Amelia’s lover, George Putnam.  Richard Gere is one of the world’s most beloved actors who captures the hearts of all his viewers.  He portrayed his role of George Putnam just as well as Swank did of Amelia.  George Putnam was a passionate man as well, who loved and supported Amelia and her ambitions.  Richard Gere was a remarkable actor for this role because he shows passion in his character and he has a great chemistry with Hilary Swank in this movie which is very important, especially when two characters have to be “in love.”  The chemistry has to be there along with the enthusiasm and for both Richard Gere and Hilary Swank it was present.  The older crowd would also love this movie because many older people are big fans of Richard Gere.  My grandmother went to this movie and she enjoyed it! Every actor that was chosen to portray their character did an amazing job.  Each actor was authentic with his or her character and made the character adhere to their real-life roles.

The director, Mira Nair, did a terrific job with the movie.  I did not know what to expect as I have not seen many of her movies, and the few that I have seen were not memorable.  She is a young director with not as much experience as some, but she definitely did a memorable job with Amelia.  Her work was commendable on this movie.  All the scenes were authentic and the movie stayed true to the time, which is very important when doing a historical film that provides factual information and scenes.  Many films done on someone else’s life sometimes drift from the facts and the scenery even wardrobe seems unbelievable at times, but Mira Nair stayed true to the time period and true to the life of Amelia Earhart.  One scene in particular remains in my memory: Amelia was gets off the plane a George Putnam stands and waits for her.  At the end of the movie they played actual footage from that scene in history,  it looked practically identical to the scene that was showed in the movie.  I was amazed at how the director can have a scene nearly that perfect, I cannot help considering the amount of work put into the single scene.  The end of the movie itself was very moving and made the viewer see how strong of a person Amelia Earhart actually was, driven and goal oriented, which made her into such an icon even to this day. The movie was directed meticulously, and it is one that is definitely worth seeing, even if historical movies are not really your taste.  It is one that viewers of all ages can enjoy and appreciate.