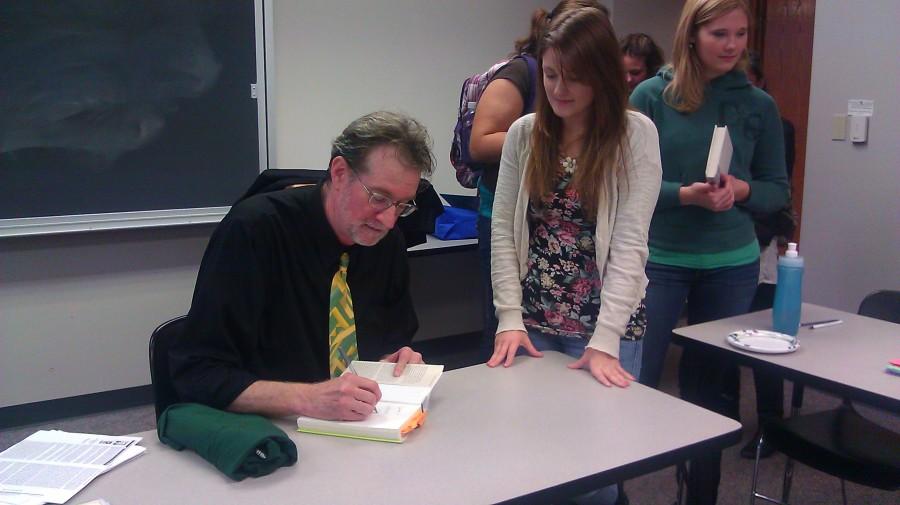 Author Steve McKee visited Marywood in November to talk about his memoir “My Father’s Heart: A Son’s Reckoning with the Legacy of Heart Disease” with Dr. Agnes Cardoni’s Literature and Medicine class.

“It was an excellent experience to have Steve here in class,” said CardoniThe class is an examination of the relationship between literature and the medical professions.

“Having an author in class was something completely different for a lot of us,” said Gina Cicco, a junior in the class. “Reading about someone’s life, and then having them stand there and tell you about it really brought home the stories in the book on a new level.”

“My Father’s Heart” is McKee’s story about how, when he was 16, he watched his father have a heart attack in front of him. The book contains the story of not only his life but of his father’s and grandfather’s lives and how they were both stopped short by heart disease.

He started writing this story while he was in college as a class assignment and continued writing piece by piece over the years. While working at the Wall Street Journal for 14 years, McKee had several articles about the experience published. It wasn’t until he himself, despite all his efforts to stay fit and healthy, was diagnosed with heart disease that he began to seriously work on the book. He bought a voice recorder and every day on his commute he would simply talk about his father, the stories he knew, and how it made him feel.

He decided to write the story backward from seven days after his father died, until the moment it happened, saying that, “The reader needed to know what was being lost.”

Dr. Cardoni met Mckee at the 2009 National Council of Teachers of English Convention in Philadelphia. She went up to him and said “Your book is exactly what medical humanities is about.” After explaining to him what that meant, they stayed in touch. When he mentioned that he would like to turn his story into a play, Cardoni called Marywood’s theater department to help him out. Students in the theatre department did a read through while McKee was visiting. “The script is in its ninth revision. Hearing it aloud helps me to see what needs to still be changed.”

Both McKee and Cardoni are hoping that when the play is finished it will be performed at Marywood, or somewhere in the area.