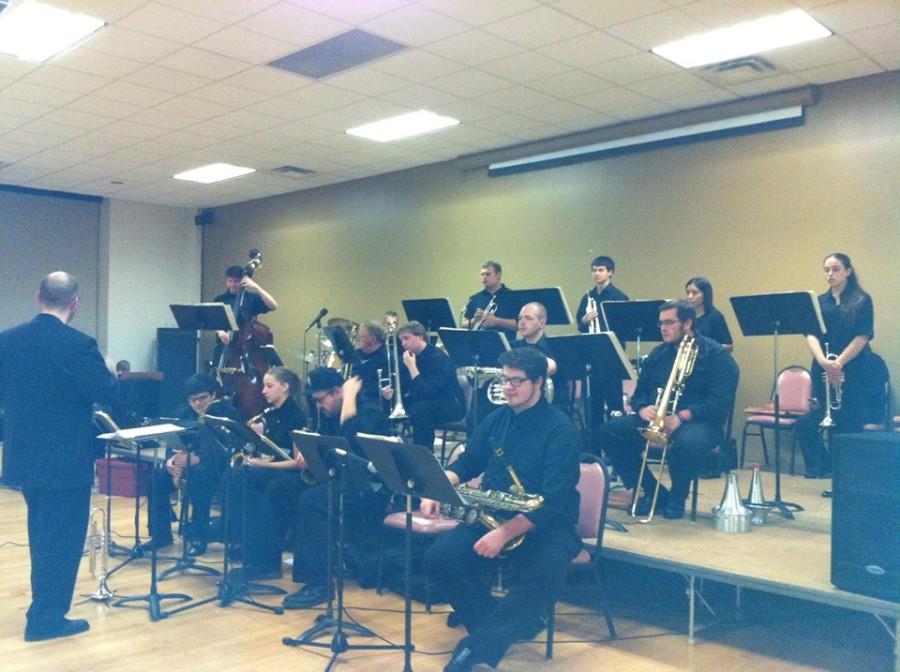 Marywood’s jazz ensemble performs monthly to give students, faculty, and alumni, a night of classic tunes and awesome dance moves. The ensemble held its last event in Nazareth Hall on Oct. 20.

Shortly before the event was set to occur, Tom Heinze, head of the ensemble was unable to attend due to medical reasons. This resulted in a slight deviation from the normal turnout.

“It was a particularly slow night,” said Alan Craig, a student from the University of Scranton and regular ensemble attendee. However, more people wandered in as the night progressed.

The ensemble played a variety of music styles such as swing, rock, and cha-cha, while the set list included songs such as “Moon River,” “Moon Dance,” and“Jersey Bounce.”

“The music for the night is actually a book of tunes from the past 60 years, and what happens is they come and they print out three different sets of tunes every month. There’s about 500 tunes in the book, and they sight read it for the most part,” said jazz faculty member David Jumper, who was filling in for Heinze.

The ensemble also featured a fundraiser table with an assortment of snacks for Marywood’s chapter of National Association for Music Education (NAFME.)

Jessica Velardi, a sophomore music therapy major who was manning the NAFME table, spoke highly of the ensemble.

“[I enjoyed] the music because they work really hard on it and it’s a lot of common jazz standards that people know or recognize, so it’s nice,” said Velardi.

The next jazz ensemble event, scheduled for Dec. 2, will feature a Christmas theme. Whether attending for the live music or the opportunity to learn some new, swanky dance moves, the jazz ensemble proves to be a good time for all.