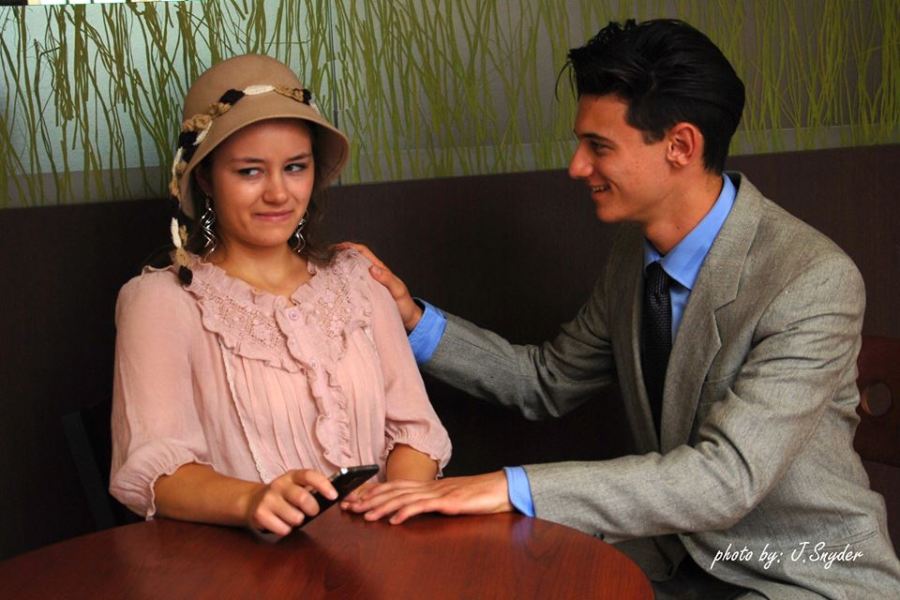 This play, written by Sarah Ruhl, is a dark, yet comedic love story packed with big issues, such as how modern technology has the ability to both bring together and sever relationships in today’s age.

The main characters, Jean and Gordon are being played by Jessica Lochie, junior musical theatre major, and Kenneth Doyle, freshman musical theater major. The two characters are linked through a cacophonous turn of events and their modern relationship, as friends and lovers evolve with technology.

The stage will be set with three monitors flipped vertically to resemble smart phones. These devices will be used to present videos, still graphics, and even supplemental set pieces throughout the performance to enhance particular moments.

Due to the pervasiveness of technological elements in this show, director James Langan suggests, “it’s almost like modern art, really, it’s almost like a Picasso.” He continues saying, “ [the play] is a modern piece that deals with modern technology and issues around technology.”

This is a stimulating and challenging show, however, the director upliftingly emphasizes,“the script does use comedy to deliver that message,” said Langan.

According to Doyle, the production process thus far has been “no easy chore.” He admits he was intimidated walking into auditions, and has “never been challenged so much as an actor, or as an individual.”

However, Doyle is grateful for the opportunity he has been given and the team he has to work with, “[Langan] has helped me realize that there are new discoveries to make everyday. Every rehearsal is basically a blank slate and we have to grow more, finding deeper roots, which is always a challenge,” said Doyle.

Langan adamantly suggests that university students come out for this performance saying, “I’d love to see the house packed with students. This is a modern show about now. For them, they can relate to all of this.”

Tickets are $10 for general admission, $8 for seniors, $6 for non-Marywood students, and free for all Marywood faculty, staff, and students with a valid ID. For more information regarding tickets call (570) 340-6097.