Kindred brings poetry to campus with workshop and reading 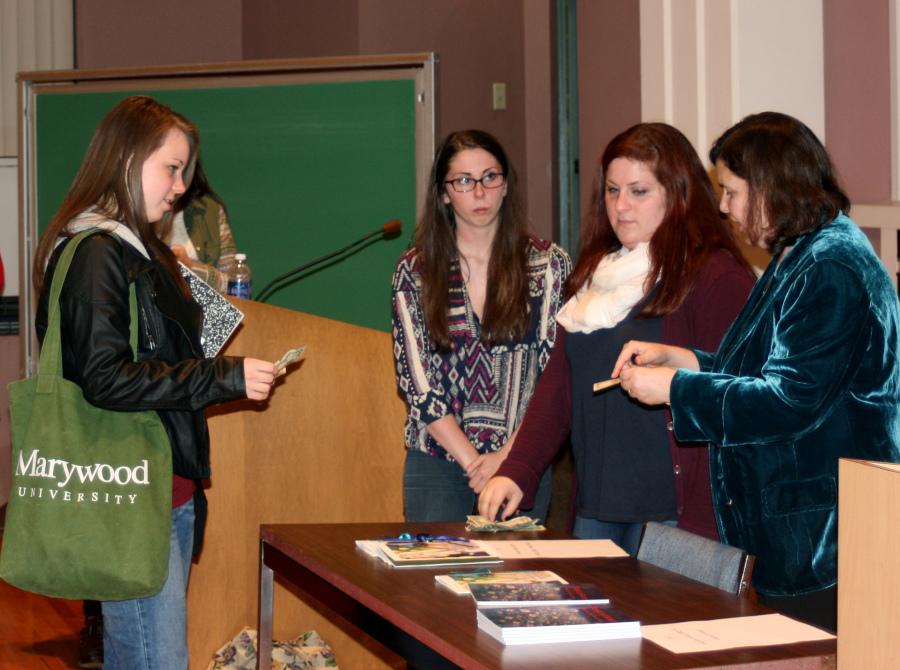 Sally Rosen Kindred signs her book for Marywood student, Brynna Tebbe, following her poetry reading at the Comerford Theatre in the Center for Natural and Health Sciences.

On Tuesday Nov. 11, Sally Rosen Kindred, came to Marywood University for a writing workshop and reading followed by a book signing.

Kindred, a poet from Columbia, Md., authored the “Book of Asters,” and “No Eden.” in addition to her two chapbooks, “Garnet Lanterns,” and “Darling Hands, Darling Tongue.”

The English Department sponsored the events. The writing workshop took place in the afternoon.
Amanda Thornley, a junior English major, attended the workshop. Thornley said that students at the workshop worked with Kindred to create persona poems.

“[Persona] poems take the persona of another character besides yourself, so basically you are narrating from someone else’s voice,” said Thornley.

The reading and book signing followed that evening at 7:00 p.m. in the Comerford Theatre, located in the Center for Natural and Health Sciences.

Kindred’s books, “Book of Asters,” and “Darling Hands, Darling Tongue” were available for purchase.
“The most recent book [“Book of Asters”] I wanted to write about family life. […] The organizing principle of the book was the Aster family of flowers, considering how my childhood was full of them,” said Kindred.

However, she credits her interest in poetry to creative writing camps she attended during her middle school and high school years.

“I think that’s when I started, sort of, seeing a poem in everything. I think that’s really when it became more part of my daily life and my identity,” said Kindred.

For more information on Kindred and her works, visit her website at http://www.sallyrosenkindred.com