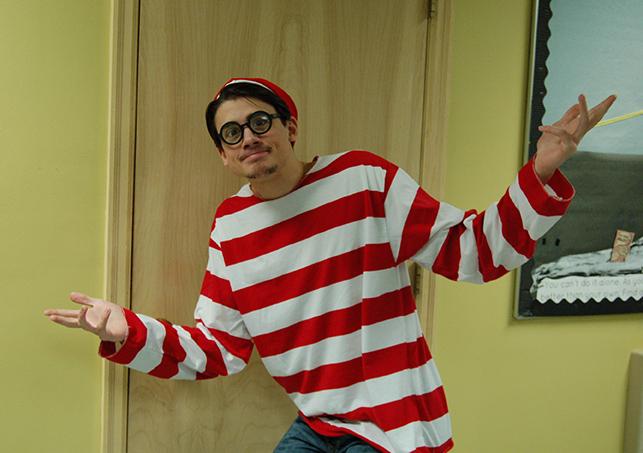 Marywood’s Student Activities Crew (SAC) is hosting a new “Where’s Waldo” event series on campus this semester. The series started on Jan. 16 and will occur a total of 10 times throughout the semester in various locations around campus.

During the event, students seek out a real-life Waldo who is hiding somewhere on campus. The first student who finds the incognito Waldo impersonator wins a prize. Previous prizes included gift cards to restaurants and cash prizes.

Each time Waldo ventures out, SAC uses its social networks, such as Twitter and Facebook, to alert students that the hunt is on. Students can also get text alerts through Marywood’s e2campus system.

According to Michael Plate, sophomore accounting and hospitality major, SAC is hoping to use “Where’s Waldo” to promote its activities in a new way.

“My idea was, ‘Let’s try something really different,’ ” said Plate, a SAC member and event planner. “You go to one event and you leave and it’s over… Let’s do something that lasts the whole semester.”

The event will be held almost every school week. SAC hosts the event around class schedules, and they aim to have it when as large a number of students as possible are available.

Plate said, “People like the spontaneity [of the event].” Since the event technically ends once the first person finds Waldo, measuring participation can be difficult, he noted. However, the event seems to be creating significant buzz around campus.

Meghan McClarey, junior graphic design major who participated in the hunt, did not find Waldo but still enjoyed herself during the event.

“I got the e2campus text while I was waiting for class,” said McClarey. “I looked around the building I was in but I didn’t see [Waldo].”

McClarey praised the randomness of the event, and said she thinks it will continue to be successful in semesters to come. “It can happen at any time and any place,” she pointed out. “It keeps the students on their toes.”

The “Where’s Waldo” event series still has a number of installments left this semester.

For anyone interested in finding Waldo, Plate has the following tip: Waldo won’t be hiding in the same place twice. “Wherever we have been we’re not going to be there again,” he said.