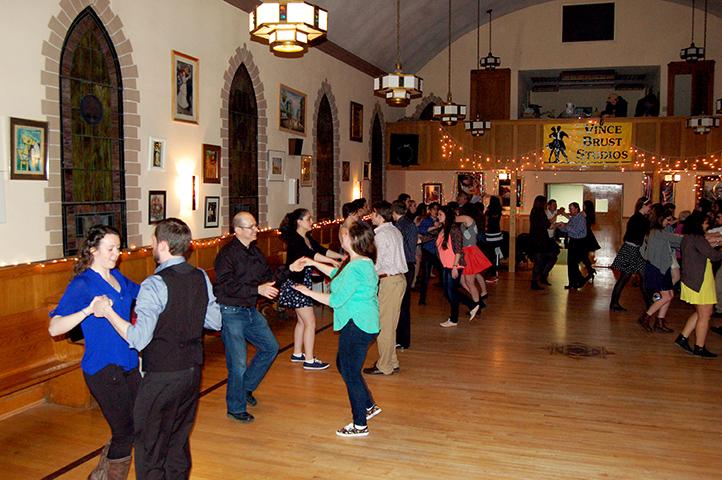 Looking for something else to do on a Friday night, two Marywood University students took it upon themselves to organize College Dance Night. The event, held Friday, March 27, offered dance lessons to college students for reduced prices.

“I just wanted a way for college students to have fun, learn how to dance. Something better than, ‘Hey, let’s go to a house party; let’s go to a bar,'” said Parkyn. “I think [with] dancing, there is just like a cop-out…You can do this for the rest of your life.”

The event was held at the Vince Brust Studio of Dance, a former church which has been remodeled into a dance studio, for only $5, half of the usual price for a lesson. Parkyn and Capoccia approached Brust about holding the event after having taken lessons with him previously. According to Parkyn, Brust was “just as on board” with the idea as they were.

Brust said that the event was so important because it was all about building communication between people.

“[The event] is not only a good idea; it’s really a necessary idea,” Brust said about College Dance Night. “The kids really need something to do where they can communicate…without having to have a drink.”

Although many of the students in attendance were from Marywood, the event was open to other local colleges.

“We actually talked to the University of Scranton and got them in on it,” said Capoccia. “We also had people from Penn State Worthington, Kings, and TCMC.”

Parkyn, Capoccia, and Brust hope to make the College Dance Night a regular occurrence, taking place either biweekly or monthly. Marisa Riley, a neuroscience and philosophy student from the University of Scranton, said that she would be willing to come back again.

“I’m just glad that they found a way to sort of bring [dance lessons] outside the classroom,” Riley said. “It’s a nice way to give students an alternative way to hang out on the weekend.”