Kat’s Kritiques: Blink 182, All Time Low and A Day to Remember put on a show to remember 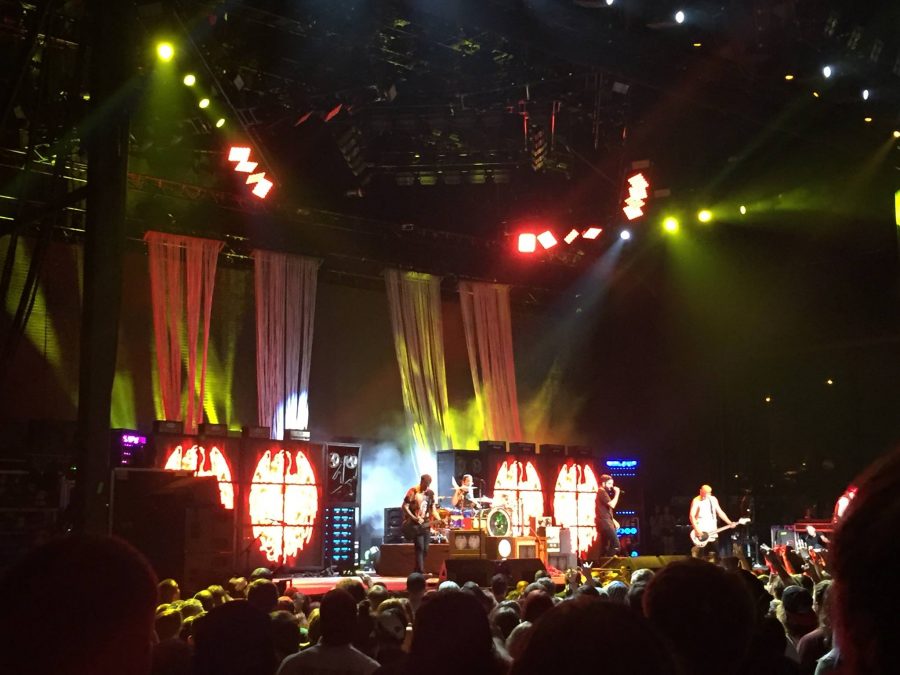 A Day to Remember perform with their intricate LED set.

As Marywood University began its second day of classes on Thursday, Aug. 25, three bands were getting ready to perform a concert of a lifetime. Later in the evening, the Pavilion at Montage Mountain would be opening the doors at 6 p.m. to headliner Blink 182, accompanied by All Time Low and A Day to Remember.

As 7 p.m. rolled around, All Time Low hopped on stage with great enthusiasm and their well- known, high-voltage energy. The crowd screamed and sang along to their songs while the band played songs off older albums such as “Weightless” and songs from their current album “Future Hearts.” During the last few songs of their setlist, Alex Gaskarth, the lead singer, pulled out his acoustic guitar and serenaded the crowd with their influential song, “Missing You,” while everyone sang along. The band concluded their set with their infamous song, “Dear Maria Count Me In,” sending the crowd into a frenzy.

After seeing All Time Low perform, it was great to reflect on a show that was different than all the others. Fans know that the band rarely gives the same performance twice, and this show was no exception.

Next up was A Day to Remember, who came on stage opening with “Downfall of us All,” off of their 2009 album “Homesick.” Their energy was through the roof and the entire pavilion seemed to shake with excitement.

Frontman Jeremy McKinnon hopped around the stage, pumping up as many fans as he could in the pit beneath him. Later in the show, McKinnon grabbed an acoustic guitar, and everyone yelled with excitement knowing that their popular song “If it Means A Lot to You” was next. The Pavilion lit up from the lights of cellphones that were held up in the air as the crowd sang the lyrics with McKinnon.

With the two opening acts completed, it was only a matter of time before Mark Hoppus and the rest of Blink-182 would enter the stage and allow the crowd to take part in a historic, once in a lifetime tour.

As the bright LED screens that ran across the back of the stage were illuminated and all other lights cut out, the concert-goers went into a frenzy as Blink-182 went into “Feeling This.”

Hoppus, Travis Barker and Matt Skiba appeared onstage at quarter after 9, and started their long-awaited performance. They played an array of old and new singles, such as the popular song “What’s my Age Again?,” “I Miss You” and “Bored to Death.” The crowd seemed to be so immersed in their set that there was not a moment of silence.

In the middle of the set, Barker, who is said to be one of the most brilliant and talented drummers in the music industry, broke into a miraculous drum solo, sending the crowd into screams of joy. Hoppus followed with his guitar solo, then moments later, joined Barker in their next song of the evening.

During their last song, Hoppus joked with the crowd saying that this was going to be their last song until they would come back out after a minute and play more songs because they are “contractually obligated,” which gave the crowd a good laugh.

The band went on to play “Carousel” and “All the Small Things,” finally closing their set with “Dammit.”

After the concert had ended and everyone began the long walk back to their cars, many fans laughed and recalled what they had just watched onstage. Even though I am not a die-hard Blink fan, I believe they put on a very fun and upbeat concert. However, I have to agree with a friend who had given her two cents to me the next day: At times, Blink-182 sounded like an early 2000’s cover band. Guitarist and vocalist Matt Skiba had replaced original member Tom DeLonge as of last year, which was the main reason they may sounded different. This situation is similar to older bands that have replaced lead singers, such as Styx, Foreigner and Journey.

Besides this small complaint, the concert at Montage Mountain was extremely enjoyable, and if I could, I would relive the day over and over again. I hope that the bands will come back to our area in the future, bringing another great and unforgettable show with them.