The Perks of a Dry Campus 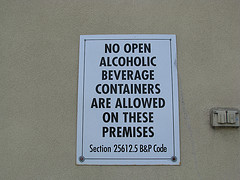 Many juniors and seniors this year will experience the joys of turning 21. After years of anticipation, they will look forward to the freedom received when going through this rite of passage. However, since Marywood is a dry campus, some will experience frustration due to the rules and regulations of the university. As frustrating as it is to not be able to drink on campus, it actually isn’t so bad. We may pout and complain about the rules of Marywood, but after my experiences living on an alcohol-tolerant campus, I have embraced Marywood’s policies about alcohol and I am thankful that those rules exist.

Last semester I had the amazing opportunity to study abroad in London, England at Middlesex University. When I arrived at Middlesex I was elated that, not only was I finally legal, but there was a Student Union bar literally 100 yards away from my dorm. The rules there were very lenient; you could have a drink anywhere you wanted on campus and the first few days we basked in the glory of this newfound freedom. However, during the second week there I knew that living on a campus that allows alcohol wasn’t all that it was cracked up to be.

The first problem was the noise level. I was so used to the quiet hours at Marywood that I had no idea what I was in for. The students partied until all hours of the night, and that was awesome at first, but when you have class at 9 a.m., the disturbances get annoying. Secondly, there are no resident assistants to help lower the noise level, so you are left to deal with it on your own.

Another serious problem I encountered was when people get drunk, someone is bound to pull the fire alarm. So, in the wee hours of the morning I would have to drag myself out of bed to gather outside in 20-degree weather. Sometimes this would happen several times a night. Not only was this a common annoyance, but the fire company would have to make the trip to the campus every time the fire alarm would go off, wasting their time on something that wasn’t even a real emergency. Additionally, the people who constantly pulled the fire alarm would never be punished, even though this is a crime in the United States.

Probably the worst situation I was involved in, though, happened one night around 3 a.m. when a group of drunken guys gathered outside were cursing and screaming, waking myself, and half the floor up. I got up and decided to file a complaint about the noise at the security desk, and when I came back to my room, I noticed that a rock was thrown through my window. After that incident, I was grateful that I lived on a dry campus. I found a new appreciation for the resident assistant’s on this campus who work to keep the noise level down and to keep potentially dangerous situations at bay.

Arriving back at Marywood I was confident that I would not have to relive the frustrating experiences I had back at Middlesex University. Although it was great to live on a campus that was alcohol-tolerant, I quickly became grateful for Marywood and its peaceful and safe campus. I believe that sometimes we take the luxuries of Marywood for granted, however frustrating it may be to follow the rules. But we never have to worry about the fire alarm being pulled every night and we don’t have to worry about rocks being thrown through our windows. So the next time you feel bummed about not being able to party on campus, just remember that the grass is not always greener on the other side.