Groundhog's Day: A Sight Worth Seeing 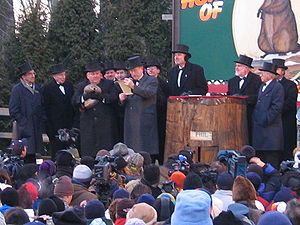 Each year on February 2, many wait to find out if we have six more weeks of winter or if we have six more until spring.  This all depends on one little ground hog, Punxsutawney Phil.  However, what exactly is Groundhog’s Day?  For many, it’s just another day, but for the folks of Punxsutawney, it’s one of the biggest days of the year.

The actual pulling the groundhog out of his home takes place at Gobbler’s Knob, a wooded knoll just outside Punxsutawney, Pennsylvania.  The parade and the celebration go from 4 am until about 7:30 am when Phil is pulled out of his home. The groundhog comes out of his electrically heated burrow, looks for his shadow, and utters his prediction to a Groundhog Club representative in “groundhogese.” The representative then translates the prediction for the general public.

After that, one would think it’s all over.  However, the celebration has just begun.  All around town there is something to do and it all revolves around the groundhog.  There’s people carving groundhogs out of ice and wood, children ice skating on a groundhog shaped pond, and much more. Even the lights in Punxsutawney are groundhog shaped.

Punxsutawney, Pennsylvania is one of the tiniest towns I have ever seen.  It is literally about six blocks long, but it holds the biggest celebration.  However, Groundhog’s day is a tradition to this town and residents swear that Phil’s prediction has never been wrong. Groundhog’s Day is definitely something that every person should experience at Punxsutawney at least once in their lives.  It’s an experience I will never forget and I look forward to traveling there again.