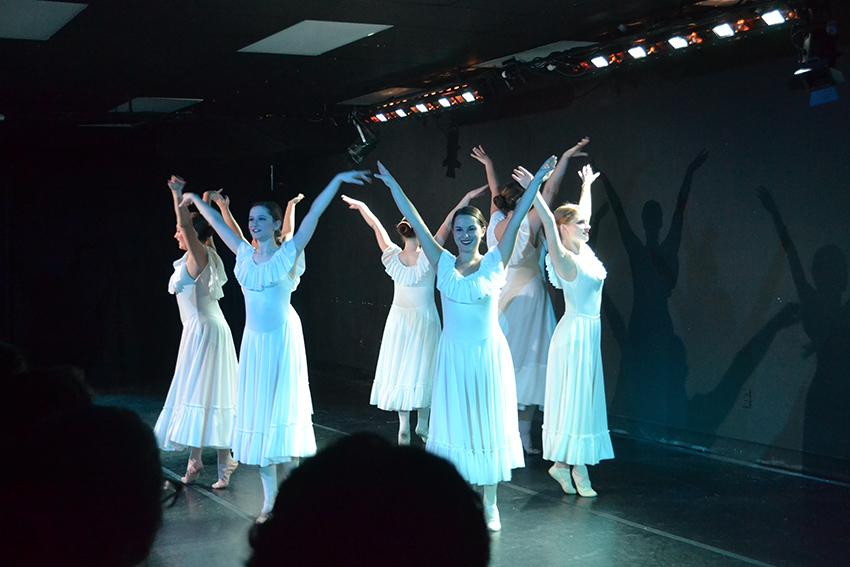 On Friday Nov. 20, the Black Box theater in the Performing Arts Center was filled with members of the Marywood and local communities for the annual Fall Dance Showcase.

“I hope that everyone comes out smiling and happy and they just really enjoy themselves […] It’s wonderful to have the support for our program,” said Amanda Hirschler, junior theater major and a member of the dance minor program.

Students in Marywood’s dance minor program, Marywood’s dance company, Dance Élan, and those involved in the theater program participated in the show. A group of young students from local dance programs also made a guest appearance in a piece entitled Together We Stand.

The show boasted a wide variety of dance styles, including ballet, tap, jazz, modern and lyrical.
Linn McDonald, coordinator of the Fall Dance Showcase, said, “We try to make [the show] as professional as we can, even though it’s in the black box, which is a small space.”

Performers dressed in vintage-style apparel danced to “Boogie Woogie Bugle Boy” to kick off the show. A combination of Arabian, Spanish, and Russian-inspired dances from “The Nutcracker” followed. Other numbers included musical theater-influenced Shoeless Joe and Shut Up and Dance.

“It’s a lot of high thrills and excitement […]Two of my favorite dances are one right after the other and that’s Shoeless Joe and Slap That Bass and they’re both musical theater and fun and exciting,” said Hirschler.

The showcase closed with Glory of Christmas, which was choreographed to a compilation of classic Christmas tunes ranging from “Silent Night” to “Hark the Herald Angels Sing.” According to McDonald in her address to the audience, the number was a send off for the holiday season.

There were positive reviews of the night’s performances. Susan Rosler, a teacher for Linn McDonald, said, “They had a lot of rehearsals and a lot of late nights this week and a lot of working together and helping each other. I think they did a great job.”