Not Graduating on Time 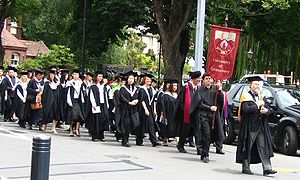 Are you close to graduating? You should count your credit hours over again, because an increasing number of college students are spending more than four years trying to earn their undergraduate degrees.

Meghan Cruciani, Associate Director of Retention and Advising, offered some reasons as to why students are not graduating on time. “The main reason would be change of major,” she said. “Students may finish late for several reasons, such as some students are undeclared, personal and financial maters, repeating courses to improve Q.P.A., not maintaining a high enough Q.P.A. for such degrees as Nursing and Education, and students that did not qualify for certain degrees.”

Also, some programs require more credits than other majors, or requirements within a major may change. Likewise, transfer students may experience problems with the number of accepted credits.

Marywood University estimates the cost of one year’s tuition as between $27,990 and $38,698, depending if you live on campus or commute. This means four years can cost anywhere from $111,960 to $154,792, without financial aid. Because Marywood only secures scholarships and grants for four years, an extra semester adds anywhere $14,000 to $18,000 to your semester billing.

No matter how long you attend school, the sacrifices you make for your college education in the short term are more than repaid in the long term.