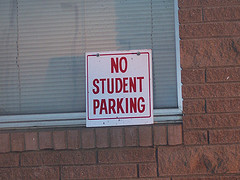 For all Marywood students – residents and commuters alike – in possession of a car, the price for a parking permit is about to be raised.

The current $50 this year will double to $100 beginning the 2008 fall semester. The permit will last from September to September.

The Marywood Board of Trustees decides parking permit prices each year as part of their yearly agenda. A sophomore Marywood student commented, “I think it’s ridiculous because they charge a fortune for us to come here and fifty dollars is a lot of money to ask from a college student.” Though the doubled price may upset you, the money does benefit the university.

Also, Marywood University parking permit prices are actually quite low in comparison to other school. Nearby University of Scranton charges $200 a year for parking.

Plus, as a University of Scranton sophomore commented, “Parking for the sophomores sucks, while parking for the juniors is good.” At other colleges, freshmen are not even allowed to have cars on campus. At Marywood University, all age groups are treated equally. However, as the Marywood student comments, “Either way, it’s a lot of money from $50 to $100…money is money.”