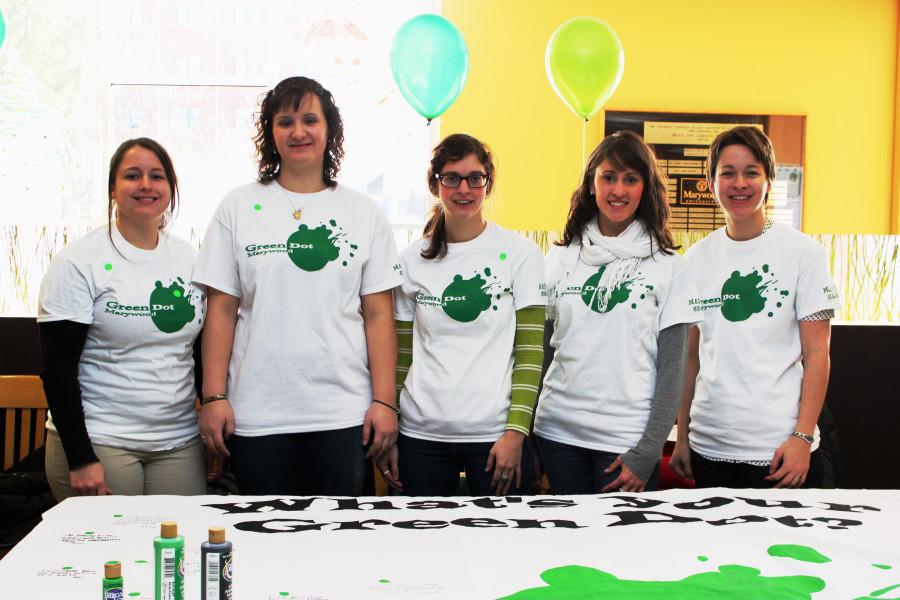 Marywood is taking a stand against sexual violence.

A 2011 study done by the National Center for Injury Prevention and Control discovered that one in five women will be raped during their lifetime. Of those surveyed, an astonishing 80% stated they were assaulted before the age of 25.

The message of the Green Dot campaign is to empower the community to stand up against sexual violence in all forms and to know that everyone can do something to end sexual violence across campuses.

“Certain Marywood professionals have been certified in Green Dot training and we are hoping to hold the Green Dot Institute here,” Barbara Decker, associate director of the Counseling/Student Development Center, said. They are attempting to organize a training in late spring/early summer.

Decker also said that they are looking for faculty, staff, and administration to participate. “Our goal is to have a lot of people on campus Green Dot trained,” she said.

Ed McNichols, a counseling graduate student and graduate assistant in the counseling/student development center, said that the Green Dot movement is meant to invoke a “cultural shift” where it is no longer okay to “victim blame” or stand by while someone is shamed or violated.

“If we’re able to stand up against violence, we can start to make a difference,” McNichols said.

The “green dot” is used as a metaphor. In the same way that red dots are symbolic of the spread of zombies in an apocalyptic-type film, green dots are symbolic of the spread of awareness of and action against sexual and relationship assault. In our lives and community, the red dots are violence and shameful dialogue toward women. The green dots represent a “cure,” or a way to abolish the red dots. The green dots come in when somebody does not laugh at a crude joke about women or stands up to the person who said it.

“The green dots are imagery empowering people, and letting [the victims] know they matter,” McNichols said.

The event included some of the Marywood Players giving an improv performance about violence intervention. The improv sketch centered around the message, “you have a voice.”

The fair concluded with a speech by Jen Mudge, a graduate student in the school of social work and a legal advocate with the Women’s Resource Center. Mudge told the audience, “Sexual assault happens everywhere.” She explained that just because it happens across the country does not mean it should become a social norm. “It begins with us. We don’t need to do it all, but we can all do something.”

Mudge outlined three ways in which people can get involved in stopping the violence: take direct action against it,
ask someone to intervene if you feel uncomfortable,and distract and remove the potential victim from the situation.

The Counseling/Student Development Center and RAE will be hosting two more events this semester against sexual violence. In March, there will be the Red Flag campaign and on April 17, “Release the Light,” a sexual assault awareness program.