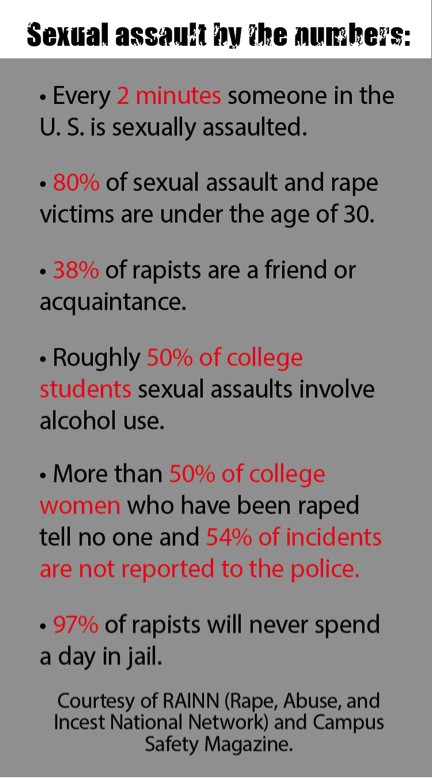 Sarah E. Cruz, News Editor
Jennifer Mudge, a graduate student in the School of Social Work and Administrative Studies, and a legal advocate with the Women’s Resource Center in Scranton, is conducting research for a proposal concerning the development of a women’s center at Marywood.
Mudge got the idea from her former supervisor who tried unsuccessfully to establish one on campus a few years ago while she was a student in the MSW program. Also, while national statistics state that one in five college-age women will be sexually assaulted, Mudge rarely saw this demographic at the Women’s Resource Center in Scranton.
“[We were] noticing that we’re serving so many women but we really didn’t see a college student population and this doesn’t fit with the statistics, so it’s like ‘where are they getting help?’” she said.
Mudge said she believes that there is a need for a women’s center on campus.
“We know [sexual assault is] happening regardless of how safe the campus is or how great the university is,” she stated. Through having conversations with individuals, Mudge has discovered that there is a discrepancy between what the university reports and what actually occurs.
Dr. Amy Paciej-Woodruff, dean of students, supports the initiative of a women’s center. In her position, she oversees the University Conduct Board, which hears cases of student misconduct including alleged sexual assault. According to the 2011-2012 Annual Security Report, there were four reported cases of sexual assault in 2011, two on campus and two in residence halls. However, Paciej-Woodruff said that these numbers are only indicative of the cases which actually go through the conduct process.
“We have very few [cases] that go through the conduct process,” she stated.
Mudge said she believes that while universities do report the cases that are brought to their attention, many more go unreported due to the stigmas that are associated with sexual assault, including shame, guilt, and victim-blaming. These stigmas can affect individuals academically, emotionally, psychologically, and socially.
Since starting her field placement with the Dean of Students in the fall semester, Mudge has gathered data through various means, including holding focus groups, conducting interviews with faculty, staff, and students from the university, and meeting with community members. She has also done a survey of numerous women’s centers across the country to gain knowledge of structure, programs, finances, and other aspects of running such a facility.
According to Mudge, a women’s center would provide all students with a place to go to for information, seminars, and assistance.
“The intention is for it to be inclusive [so] you don’t have to have been sexually assaulted to use the center,” she said.
“A lot of people think they’re invincible, that it’s not going to happen to [them]. [But] what if it happens to your friend? You want to be able to support them,” said Paciej-Woodruff.
Mudge hopes to present the proposal by the end of the semester to university administration.
“I just feel like it could be an asset to the university and beneficial to the students and the faculty.”
Delete Image
Align Left
Align Center
Align Right
Align Left
Align Center
Delete Heading