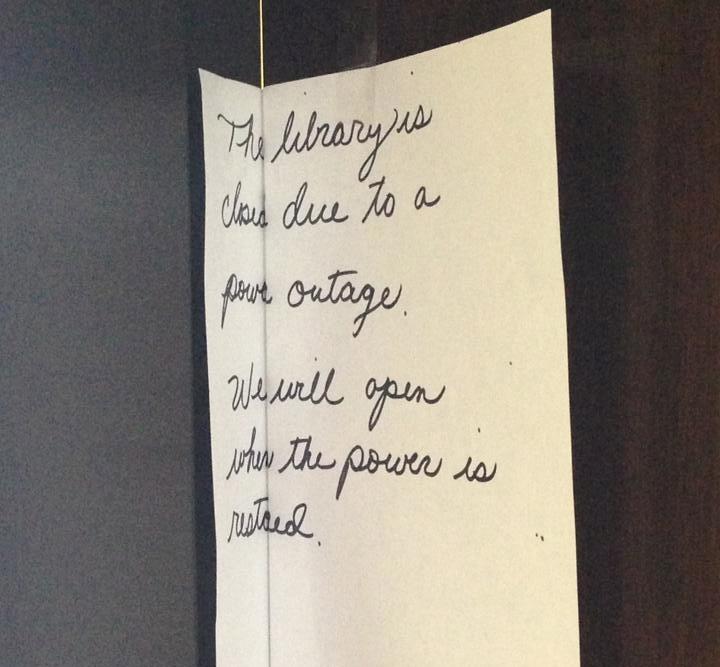 A power outage shut down the Learning Resource Center today and impacted the Marywood network.

Students and faculty received an email from John Porter, director of operations, at 8:33 a.m. about a power outage affecting several buildings on campus, including the library. Faculty and staff also received a voice message in the morning from Martin O’Connor, telecommunications manager, stating that the network was down.

Mike Finegan, chief of campus safety, estimated that an overnight storm caused the power outage to occur around 4:30 a.m. Tuesday.

In his first email, Porter said the power outage was affecting Marywood servers, that a number of things including the MarywoodYou portal, Admissions Recruiter, Colleague Test Environments, and the Marywood home page would be affected around campus, and that an email would be sent to notify the community when the problem had been resolved.

Signs were taped on the library entrances by mid-morning notifying students and faculty that the library would be closed until the power was restored. Classes were relocated.

“It was confusing at first because my class wasn’t on the list on the library door and I honestly have no idea how everyone but me … knew where to go,”said Erica Nealon, a junior communication arts major.

Hours later, at 12:17 p.m. those registered with e2campus received an alert and the campus community was notified via email that the library would close at noon.

A follow-up email, sent by Porter at 12:32 p.m. repeated much of the initial information, adding that Physical Plant was working to resolve the issues as quickly as possible, and that the LRC would close at noon but all LRC classes would still be held in alternate locations.

Mike Finegan, chief of campus safety said the alert came around noon once administrators realized that power would not be quickly restored.

“I got a  call around 11 o’clock to send an e2campus message out to the students and staff that the library was closing because they realized at that point that the issue was not going to be a quick fix,” said Finegan.