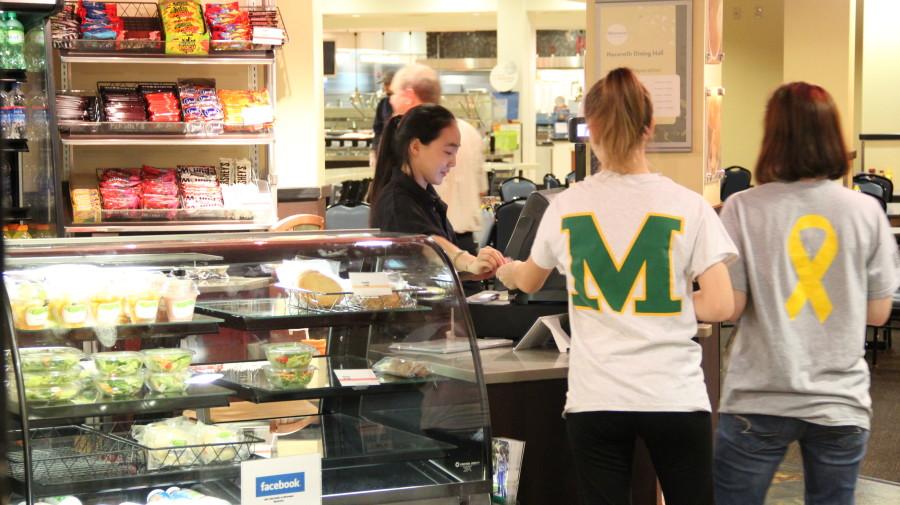 The price of lunch in the Nazareth Dining Hall rose dramatically this semester from $9 to $15.

The Nazareth Dining Hall, which is run by Chartwells, an independent food service provider–serves lunch as an all you can eat buffet. In order to gain access to the dining hall, patrons now must pay a flat rate of $15 to enter.

Even though the menu at the dining hall changes every semester, the change in menu was not a factor when raising the price, according to Tom Notchick, resident district manager of Chartwells at Marywood.

“The price of meal plans increase every year, and there hasn’t been a price increase [for walk-in patrons at the Main Dining Hall] in a number of years,” said Notchick.

Joe Garvey, vice president for business affairs and treasurer, explained that the price increase for walk-in patrons was put into place to make the prices for meal plan patrons and walk-in patrons the same.

“In order to make the cost of meals in the main dining hall compatible with the prices of meal plans, we decided that it was inequitable for people to pay different prices,” said Garvey.

Returning patrons also may have noticed that punch cards are no longer being offered across campus. Up until this year, if a patron bought a coffee, smoothie, or even meals at Nazareth, they would receive a punch on a punch card. After 10 punches, the patron would be entitled to a free meal.

“[In the past] I had several individuals coming with a filled punch card every day, which is nearly impossible. We decided to eliminate the cards across the board because certain individuals were abusing their privileges,” said Notchick.

Notchick said that Chartwells was honoring punch cards throughout the summer, but as of the start of the fall semester, all punch cards are void.

Many students, especially commuters without meal plans, are not happy about the price increase. Fifth-year interior architecture major, Asia Huertas, is one of them.

“Being a commuter without a meal plan, I am really not too fond of the price increase,” she said.

Senior business major, Chad Black, said he will no longer eat at Nazareth. “If they’re going to raise the prices, they should raise the quality of food,”  said Black.

To see the daily menu for the dining hall, visit www.dineoncampus.com/marywood/