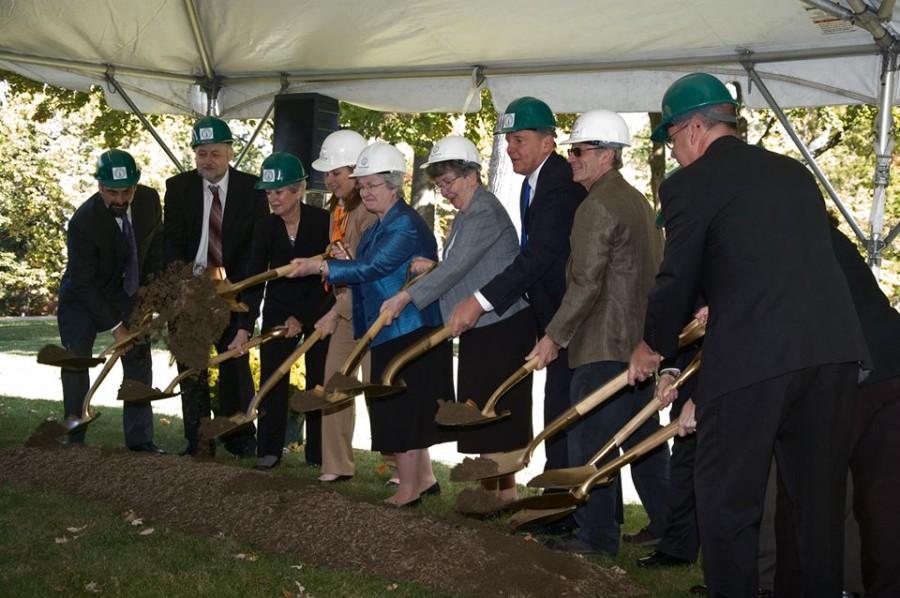 Sr. Anne Munley, IHM, Ph.D, along with other Marywood trustees take part in the ceremonial ground breaking for the Learning Commons

Marywood University has officially launched its centennial campaign, “A Bold Heart,” which seeks to raise $75 million. The focal point of the campaign is fundraising in support of the construction of the Learning Commons, a new building that will replace the existing library on the campus.

On Oct. 18, administrators and members of the board of trustees participated in a ceremonial groundbreaking outside of the Learning Resources Center, which symbolized the beginning of the project set to be completed in the year 2015.

Vice President for Business Affairs, Joseph X. Garvey, explained that the date for the ground breaking was chosen both to coincide with the kickoff of the centennial campaign, but also because phase one of the project was already completed. Phase 1 of the project, which was completed in August, involved moving the pipe lines that run underground by the Art Field.

The university applied for a RACP (Redevelopment Assistance Capital Program) grant last year and was awarded a grant in the amount of $4 million back in February. The university is incurring a debt of $20 million dollars, according to Garvey.

“The balance of the project will come from the university’s centennial campaign,” Garvey said.

The night before, the university launched the public phase of “A Bold Heart,” of which the Learning Commons is the central focus. The event was held in the Center for Architectual Studies. Trustees as well as alumni attended as Sr. Anne Munley, IHM, Ph.D., president of Marywood University, announced the plans for the centennial campaign.

“It [The Learning Commons] is not the only part, said Sr. Anne. “It is imperative that we build a strong endowment for a secure future.”  Sr. Anne explained that the university wants to provide students with more opportunity for years to come.

“I feel like it’s more appealing to students because there [will be] more electronics and it’s supposed to be a more calm, relaxing environment,” Rossi said.

At the end of the night, Sr. Anne invited those in attendance to participate in a time capsule activity of signing commemorative acorns to be placed in a new time capsule. Sr. Anne chose acorns to symbolize the continuing growth of the university.

“Our founding sisters, rooted in this community, planted a seed for an institution of higher education for women of this region,” said Sr. Anne. “What began as a small seed of inspiration has grown, withstood challenges, and branched out with each generation to become an institution of incredible strength and new life.”