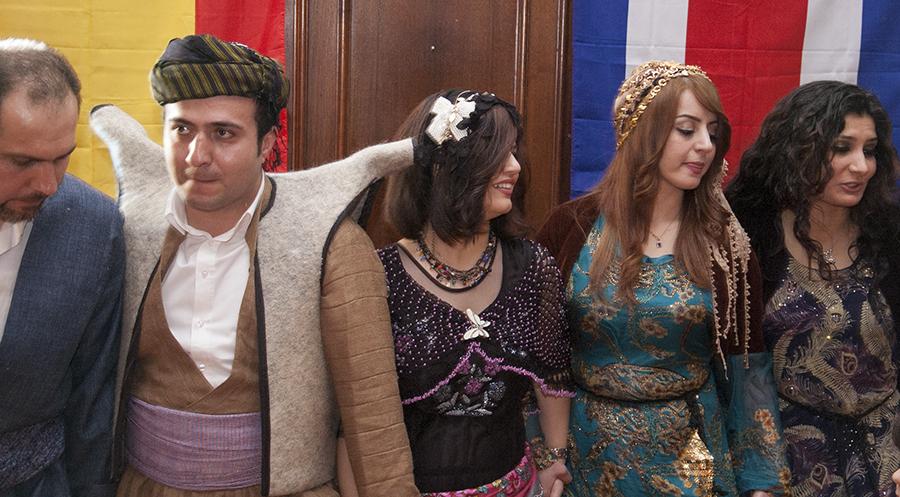 It may have been March 21, but Marywood was celebrating a new year.

The Kurdish club celebrated Newroz, the Kurdish new year, with a campus event.

The Kurdish club asked attendees to dress in traditional clothes if they wished.

After the speakers addressed the crowd, traditional food was served and dancing followed. Kurdish students and guests alike danced around the room with arms linked.

The origin of Newroz dates back to Babylonian times. Different than the American calendar, the new Kurdish year is 2714.

Dr. Alexander Dawoody, associate professor of administrative studies who is also Kurdish, was the driving force of both the Kurdish club and the Newroz event.

“Newroz is a big holiday not only for the Kurdish people but for almost 300 million people around the world. It’s the largest significant holiday celebrated ethnically, not religiously, and the United Nations even acknowledged it as an international day of celebration,” said Dawoody.

Dawoody said he was inspired to start a Kurdish club because of the several other international clubs on campus. For many of the Kurdish students, this was their first year away from home. In order to make the transition easier, they decided to hold the event.

A lot of planning went into making the event a reality. Poshya Ahmed, a Kurdish student in the intensive English program, explained that every member of the Kurdish club had a position.

“We had a meeting every week for two months, sometimes more than once a week,” Ahmed said.

Ahmed also said that they have received overwhelming support from all members of the campus. She was happy to see so many people attend and enjoy the event.

Dawoody said he expects a stream of new Kurdish students to come to Marywood, as the Kurdish Embassy is very pleased with all that Marywood has to offer. He also said he hopes the event will grow in the coming years.

With the support of Sister Anne, plans are already in the works for the next Newroz celebration.

Newroz is always March 21 and the event is expected to be held in the Latour Room next year.