Construction of the Learning Commons remains on schedule 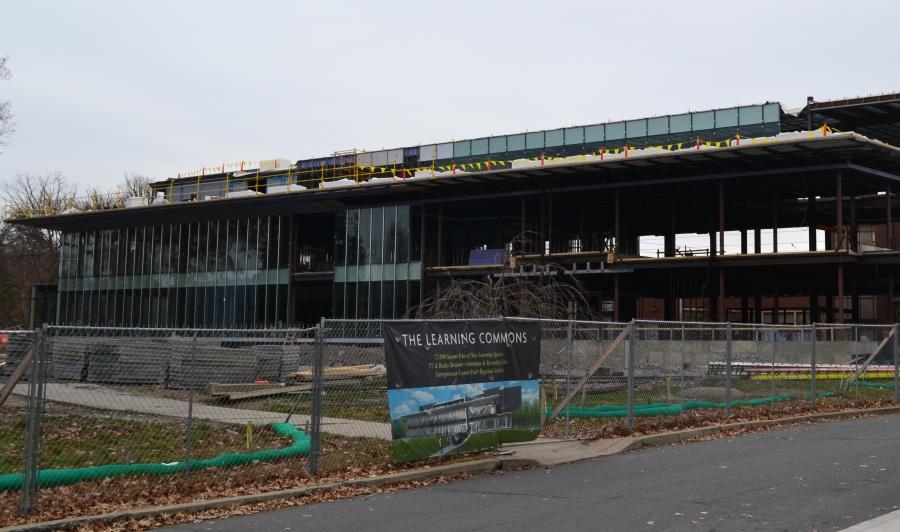 Since the launch of the Centennial Campaign, “A Bold Heart,” the Learning Commons has been an integral part of Marywood University’s ambitious project. The campaign seeks to raise $75 million, with approximately $38-$40 million solely devoted to the new construction.

On Oct. 18, 2013, the ceremonial groundbreaking marked not only the symbolic beginning of the new construction, but also held the promise that the project would be completed in 2015.

Attempts to speak with Vice President for Business Affairs and Treasurer, Joseph X. Garvey regarding the Learning Commons updates were unsuccessful. However, Garvey did provide a number of important dates and landmarks over the upcoming years via email.

As of right now, construction is on schedule and the roof and exterior are expected to be completed by Dec. 2014. There will be a dedication of the building on Sept. 8, 2015.

Demolition of the current library will take place in the winter of 2015-2016 while work on the amphitheater will commence around Spring and Summer of 2016.

Another lingering concern is the status of the capital campaign and whether fundraising for the new structure is on track. The university initially sought funding from a variety of sources, which included the Commonwealth of Pennsylvania’s Redevelopment Assistance Capital Program (RACP), as well as additional loan and bond issues.

According to Renee Zehel, vice president for university advancement, a total of $42M has been pledged for the Bold Heart Campaign. Donors who make pledges have up to five years to fulfill their pledge. The money already pledged is spread across the three major initiatives within the campaign, which include the Capital Campaign, the Annual Fund, and the endowment.

Of that $42M, approximately $11M is earmarked for the Learning Commons. Four million dollars of that $11M came from the RACP grant, while the remaining $7M came from donors.Zehel referred questions regarding the amount of pledges that have already been fulfilled to Garvey. Garvey could be reached before press time for comment.

Since the groundbreaking, the project has been underway for more than a year. Most recently, students, faculty, and staff had the opportunity to sign the structural beam that completes the frame of the Learning Commons.

On Oct. 8, Sr. Anne Munley, I.H.M., Ph.D., president of Marywood, invited members of the campus community to the “topping off” ceremony where construction workers lifted the signed beam with an evergreen tree placed atop it to complete the building’s frame.

According to Munley, these events serve a symbolic purpose for everyone on campus.

“We are a values-based institution, and respect is critical to all we do. It seemed an appropriate time to really respect God’s creation and that’s why we did the topping off with the tree, which symbolizes that God’s creation is above all creation,” said Sr. Anne a few days after the ceremony.

“This will be the intellectual and social center of our campus. We have had more than a ten year history of researching the kind of services, and programmatics, and technology, and social learning space that needs to be a part of Learning commons that will serve this and the broader community for many years going forward,” said Sr. Anne.

Of course with the construction of such an ambitious project, there are also several concerns. Once lingering concern is the unpredictable weather, which may prove troublesome during colder months.

“The weather’s been with us. In the next few weeks, the crane will be finished with that part of construction, and we’ll be able to focus on the walls and the interior, so it’s moving along. It’s moving along on time,” said Sr. Anne.