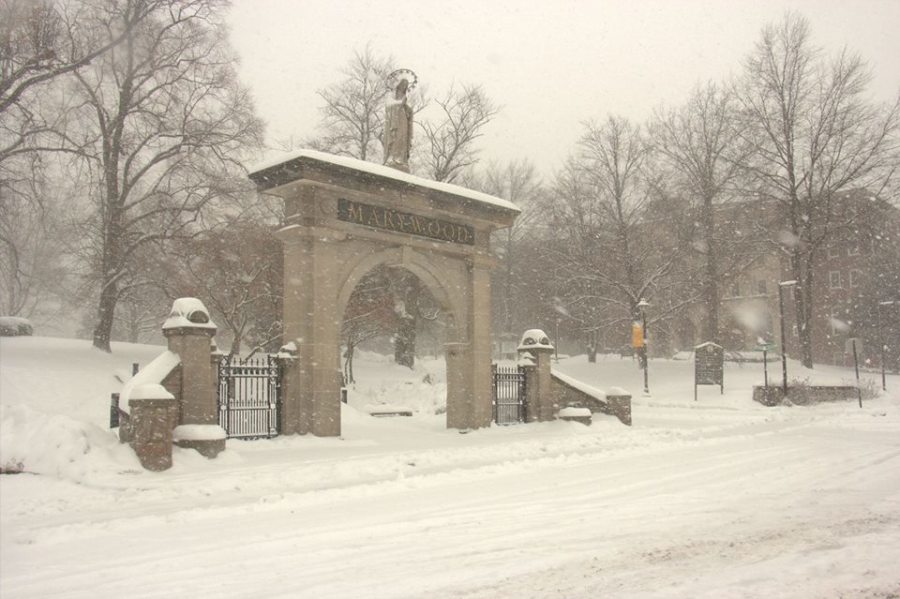 In this stock photo from 2013, snow covered Marywood University resulted in snow days.

With the forecast calling for a wintery mix and snow in the next few days, Marywood community members are beginning to worry about how the weather will impact final exams.

According to The Weather Channel, the Scranton area can expect 1 to 3 inches of snow tonight, with another 1 to 3 inches tomorrow. This will make for slick driving conditions across the area.

Marywood University is in the process of developing a plan for how to deal with the storm if it interferes with finals. Ann Boland- Chase, vice president for Enrollment Management and Student Success, said that the decision to postpone finals would ultimately be up to Rosemary Burger, the Registrar.

“[Burger] has several scenarios under consideration depending on what, if any, exam periods may need to be cancelled,” Boland-Chase told The Wood Word in an email.

However, Chase made it clear that no final decisions have been made in regards to the final schedule.

“Since the weather prediction is still somewhat uncertain, [the Registrar] cannot make definitive changes at this time,” she said.

Boland-Chase pointed out that any final periods cancelled throughout the week can be accommodated by the open final periods on Friday.

Wendy Yankelitis, assistant vice president for Buildings and Grounds, said that the grounds crew was out in full force to make the campus as safe as possible for students in the winter weather.

“Members of the grounds crew arrived on campus at 5:30 this morning to start salting sidewalks and parking lots if necessary,” Yankelitis said.

The storm may cause residents to have to move their cars so parking lots can be empty for snow removal.

“As the storm progresses, we will reach out to Ross Novak, Director of Housing and Resident Life,” Yankelitis said, “and request residents to move their cars to the upper and lower freshman lots.”