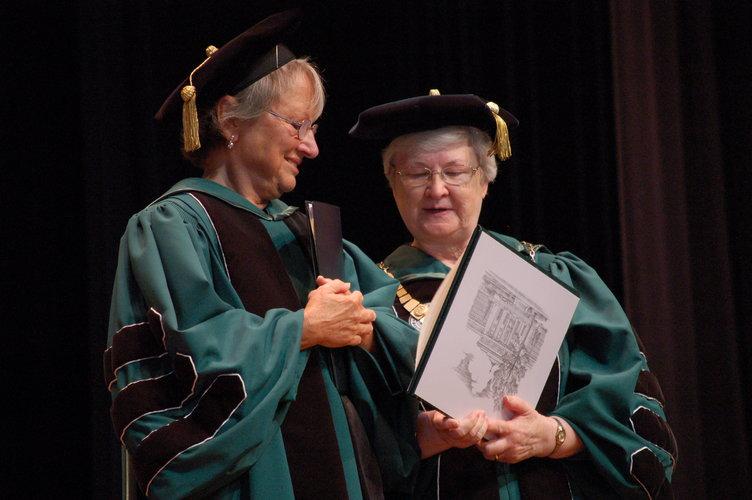 Evelyn Minick, a librarian for more than 40 years, said the new Learning Commons will become "the heart of the university."

Marywood’s Centennial Week kicked off Tuesday morning with Convocation, which took place in the Sette LaVerghetta Center for the Performing Arts.

The event, which formally marks the start of a new academic year, was centered on the dedication of the new Learning Commons.

Seated in the front row of the stage party at this year’s ceremony was the Most Reverend James Timlin, bishop emeritus of Scranton; Dr. Ann Henry, chairperson of the Marywood Board of Trustees; Sr. Ellen Maroney, president of the Congregation of the Sisters, Servants of the Immaculate Heart of Mary; Evelyn Minick, former librarian at St. Joseph’s University and the featured speaker for the event; Sr. Anne Munley, I.H.M., Ph.D., president of the university; Dr. Alan M. Levine, vice president for Academic Affairs; Ann Boland-Chase, vice president for Enrollment Services; Renee Gregori Zehel , vice president for University Advancement; and Mary T. Gardier Paterson, Esq., secretary of the university and general counsel.

Also on stage were other members of the Board of Trustees, the I.H.M. Congregation, professional and support staff senate presidents, and the faculty banner bearers.

Joseph X. Garvey, vice president for business affairs and treasurer, was absent from the day’s events.

Bishop Timlin delivered both invocation and the greeting in place of Bishop Joseph C. Bambera, who was unable to attend due to illness.

Timlin concluded the invocation by asking for “a blessing on the University” as “these are really troubled times that call for the education of the whole person, education that Marywood could offer.”
Sr. Ellen Maroney, president of the I.H.M. congregation discussed Marywood’s history and how the University got its start 100 years ago. Sr. Maroney concluded her address by saying that “Marywood today stands as a testament where ordinary lives have extraordinary dreams.”

Shortly following Sr. Maroney’s speech, Peter Kilcullen, associate vice president for marketing and communications and the event’s emcee, read a letter from The White House that congratulated Marywood on 100 successful years. The letter was signed by President Barack Obama.

In her remarks, Sr Anne said that she was “overcome with gratitude” as “today we rejoice and give thanks for 100 years of blessings.” She detailed Marywood’s roots and history before concluding by saying, “This is Marywood’s moment.”

Evelyn Minick, a librarian for more than 40 years with a distinguished career in both public and academic libraries, delivered the convocation address. Minick most recently worked as the university librarian at Saint Joseph’s University in Philadelphia.

The Centennial Convocation ended with a musical interlude by Marywood’s Chamber Singers and a recessional by Marywood’s Wind Ensemble.

Also missing from this year’s ceremony were the CASE Professor of the Year and the Distinction in Discipline Awards that are usually given annually to faculty members. The Wood Word is investigating this change to the program.

Following the convocation, all students, faculty, and staff were invited to the Learning Commons for the building’s dedication.