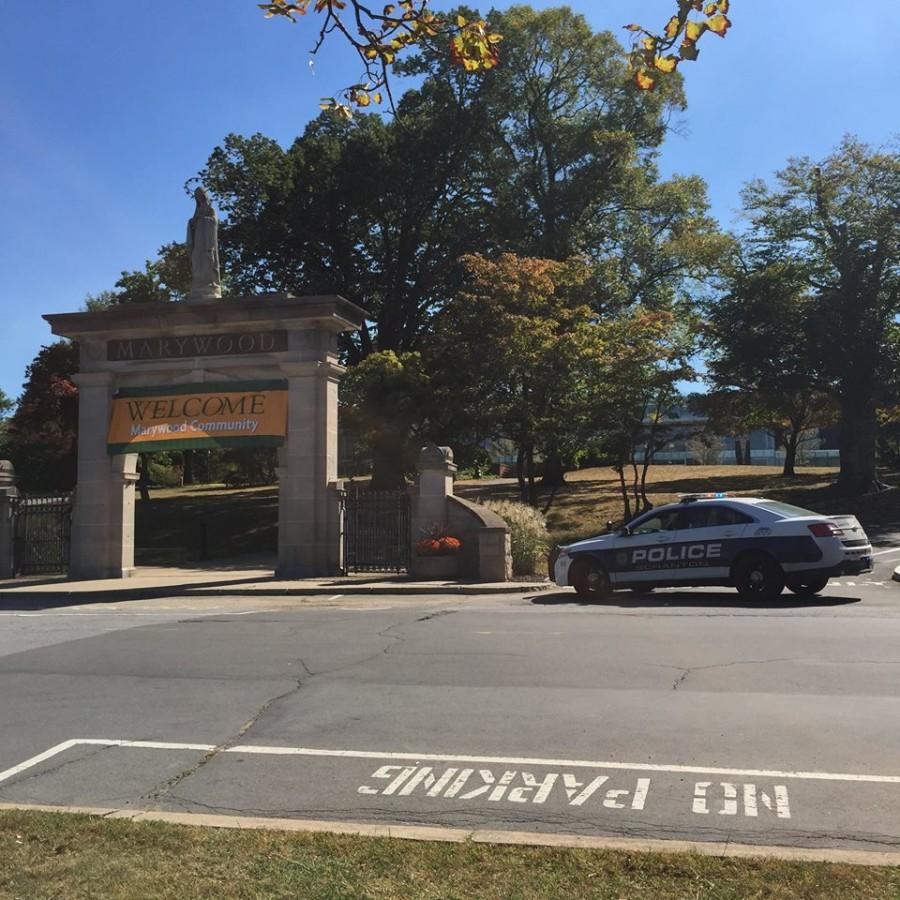 Marywood’s campus is teaming with security personnel and news media rather than students today after bomb threats were called in earlier this morning.

Campus Safety received two threatening calls this morning, one around 7 a.m. and another around 7:30 a.m.

The campus was evacuated and police officers are on standby, blocking entrances to the Nazareth Hall parking lot, College Rd. and University Ave. Fire trucks also arrived on the scene and fire alarms could be heard in the distance.

University officials canceled both day and evening classes and closed offices for the remainder of the day.

Students were told to leave residential halls and go the Sette LaVerghetta for Performing Arts Center (PAC) where school buses came to shuttle students to the Dunmore Community Center.

Campus Safety Sgt. Kyle Miller confirmed that there are bomb dogs present and every building on campus is being searched for a bomb.

“The threat said the bomb was in residential area. Doing the residential halls is our first concern,” said Miller. “We will be looking at everything inside the buildings.”

“If there is a bomb, it’s the police’s call on what to do,” Miller added. “If there is no bomb, the authorities will decide on that matter.”

WNEP 16 News reporter Ryan Leckey, a Marywood alum and former communications arts instructor, was on the scene interviewing students about the bomb threat.

“We heard about the situation in our news room through the scanner chatter,” said Leckey. “Police were talking about activity at Marywood, so we started looking at the Marywood website and saw the bomb threat posted on the Marywood Twitter.”

Leckey received his Masters in Communication Arts at Marywood and taught as an adjunct professor here for several years.

“This has never happened while I was here,” said Leckey. “We’re still trying to figure out what’s going on.”

While some students got the notification that there was a bomb threat, not everyone was aware of the situation. Some students and personnel arrived on campus before police told them to leave campus.

Chartwells worker J.J. Brown was driving up to campus to report for duty when he learned that campus was evacuated.

“I found about it [the bomb threat] on Snapchat,” said Brown. “I still thought places would be open. My first though was wow… I hope everything is fine.”

Julia Randall, a freshman finance major, was at a 7 a.m. swim practice when she learned of the bomb threat.

“I was in the pool when our coach told us to get out the pool,” said Randall. “She told us to get our stuff and get out as fast as possible. I didn’t really know what was happening, and I was scared. I went to Loughran Hall to grab necessities and changed out of my wet swim clothes into dry clothes.”

Randall and her freshman cohorts gathered in The Pit. From there, students moved to the Performing Arts Center. Randall and some teammates relocated to a friend’s off-campus home.

New Associate Professor Lynn Pauley lives nearby campus and was observing the scene from her front yard.

“We are sitting on the corner of history right now,” said Pauley. “I don’t really feel afraid. My attitude is that with one phone call, someone yielded so much power over us.”

“No matter how many threats they have, the police and firefighters are running toward the scene… it is very brave,” said Pauley

Pauley also added that this incident is likely to bring community members together.

“This is trying to make us afraid, but if anything good will come of it, it is that we will redouble efforts to live out Marywood’s mission,” said Pauley. “This [Marywood University] is a jewel. We have the best students and this will bond people together.”