Faculty Awards delayed because of change to Faculty Activity Reports 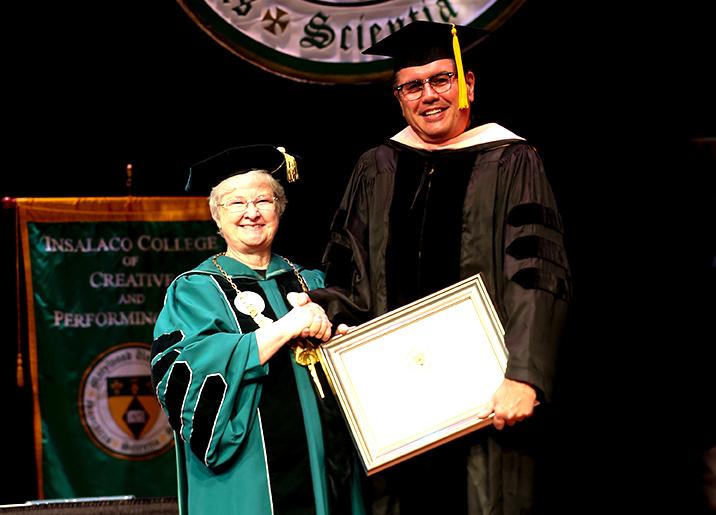 Sr. Anne poses with Dr. F. David Romines as he receives his faculty award at the 2014 Convocation.

The CASE Professor of the Year and Distinction in Discipline faculty awards have not been eliminated or overlooked, just delayed, administrators have said.

In Septmeber, The Wood Word reported on Marywood’s Centenial Convocation and noted a change from the usual program. Absent from this year’s ceremony was the CASE Professor of the Year and the Distinction in Discipline Awards that are usually given annually to faculty members.

Faculty Awards are determined each year in part by using Faculty Activity Reports (FAR). FARs are annual self-assessments prepared by faculty members that detail their work in areas of teaching, scholarship, and service during the previous year.
“[…] The FAR are meant to be the beginning of a conversation [for determining recipients],” said Dr. Frances M. Zauhar, Dean of the Munley College of Liberal Arts and Sciences. Zauhar is in charge of finalizing faculty awards.
According to Dr. Alan Levine, vice president of Academic Affairs, the deadline for FARs changed to better coincide with the traditional academic calendar.
“In the past, the FAR covered a spring [semester] around to a fall [semester], so it was a calendar year,” said Levine. “That was problematic because we run on an academic year.”
According to the Levine, to change the schedule, the most recent FAR would go from covering the usual Spring to Fall semesters to covering Spring 2014, Fall 2014, Spring 2015 for one time only to get on the correct schedule. Due to that change, awards weren’t ready for this year’s early Convocation date.

However, going forward, Levine would like to see Faculty Awards return to convocation.
“I like it at convocation; it fits into the program, and it just makes sense.”
However, there are still plans to give out Faculty Awards this year.

“The plan is still to complete the [selection] process and schedule an awards presentation in the fall, or early spring at the latest,” said Zauhar.
“We want to do it,” concluded Levine. “We want to honor those faculty members who should get these awards, and we will.”