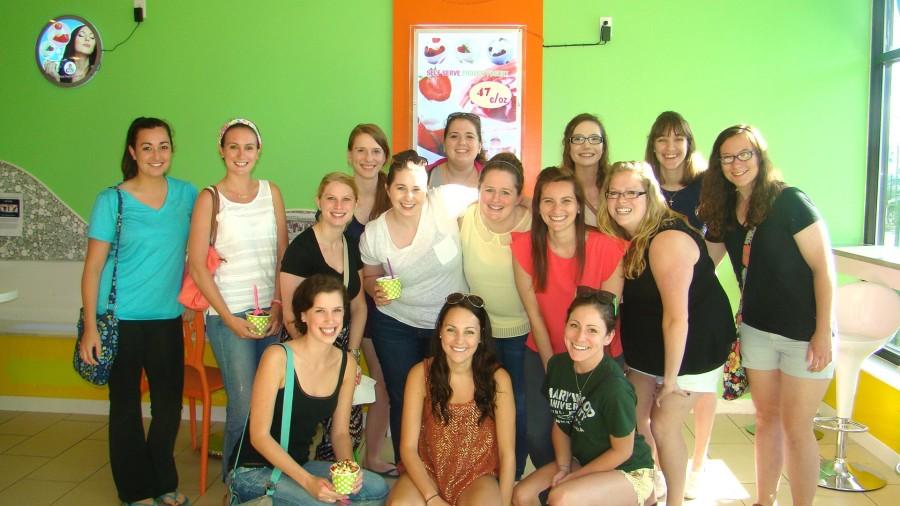 Photo courtesy of Marketing and Communication

The Aphasia Support Group poses at their fundraiser at Yogurt City in Dickson City.

This is the group’s second consecutive win. Marywood’s group was chosen from more than 400 nominations and won the award with 2,911 votes.

“It was because of Marywood University students, faculty and staff votes that we won,” said Marla Kovatch, M.A., CCC/SLP, clinical instructor in the CSD department.

The Aphasia Support Group consists of Communication Sciences and Disorders (CSD) graduate students who plan activities each week for those affected by aphasia.

Aphasia is defined as “a communication disorder that results from damage to the parts of the brain that contain language,” according to the American Speech-Language-Hearing Association’s website.

CSD graduate students work with family members and the caregivers of those suffering from aphasia to help recover speech, language and reading skills.

Laura Drake, language-pathology graduate student in the CSD department, said that the award is well-deserved.

“Our members and their families and friends really deserve the recognition they are receiving,” said Drake.
According to stroke.org, the Voter’s Choice award honors a group that represents the best effort in raising stroke awareness.

“It feels great to raise awareness for aphasia because not many people are familiar with this language disorder,” said Drake. “I hope that our aphasia awareness event helped people in the community to recognize this disorder and feel more comfortable communicating with someone with aphasia.”

June is the national aphasia month. At the fundraiser, students handed out flyers and brochures to educate others about aphasia and stroke victims, according to Kovatch.

Kovatch said that she hopes the Aphasia Support Group continues to hold events to benefit the National Stroke Association and raise awareness about the disorder.
“I could not be prouder of the everyday heroes that comprise Marywood University’s aphasia group and the students that I get to collaboratively work with each semester,” concluded Kovatch.