Take Back the Night Speaker talked about relationship violence 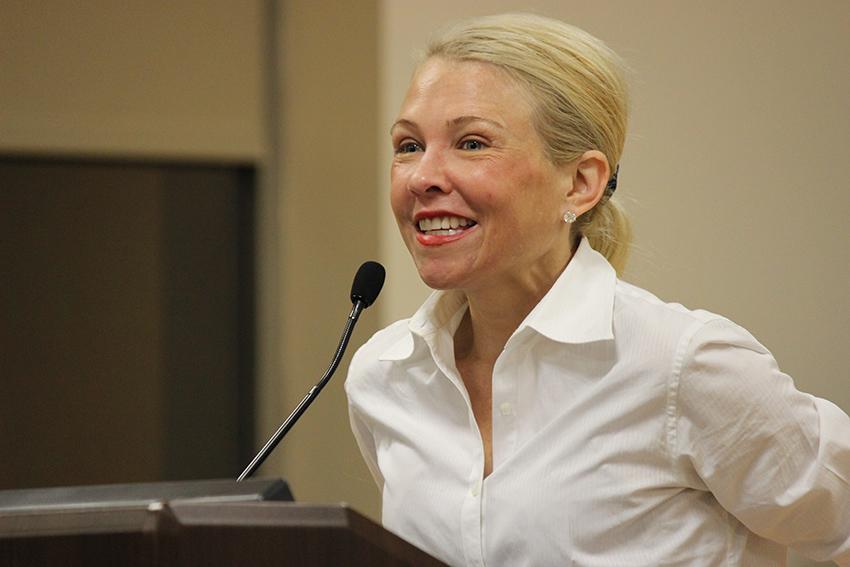 Katie Koestner speaks in the Latour Room on Oct. 29.

On Thursday, Oct. 29, Katie Koestner, international speaker and director of Take Back the Night Foundation, held a “No-Yes” presentation about relationship violence at 9 p.m. in the Latour Room in Nazareth.

In an interview before the presentation, Koestner said that the topics she would discuss would include consent, incapacitation, how men can make a difference, and what someone can do to help another if they have been sexually assaulted.

All Marywood athletes were required to attend the presentation, which was open to the public.

According to Eric Grundman, assistant athletic trainer and men and women’s golf coach, Marywood holds a student athlete seminar every year and requires all student athletes to attend.

Katie Tutak, head women’s lacrosse coach, said that cost is a big factor in choosing the athlete seminar each year.

“Last year we received a grant and we were able to bring in a nationally known speaker on nutrition,” said Tutak. “Nutrition was a topic that we thought was very pertinent to our student athletes.”

Tutak said that for the athlete seminar this year, Marywood’s Peers on Wellness (POW) group had already invited Koestner for this presentation on relationship violence.

Tutak said she felt this topic also applied to athletes.

In previous years, athlete seminars have been about various topics including nutrition and academics, according to Tutak.

According to Koestner, athletes are role models who are admired by other students.

“I think that when they take a stand and say something is not acceptable, then other people tend to pay attention,” said Koestner. “We really need to motivate them to be a part of the solution.”

During the presentation, Koestner addressed the athletes in the audience by saying if they take a stand, others will, too. She concluded the presentation by asking for students’ help when they see someone who needs it.

According to takebackthenight.org, the mission of Take Back the Night is to “create safe communities and respectful relationships through awareness events and initiatives.”

The website states the organization aims to end sexual assault, dating violence, domestic violence and all forms of sexual assault.

Twice a year, Take Back the Night holds a national event called “10 Points of Light.”

The organization selects 10 locations in the United States to hold a special vigil to show support for survivors of sexual violence, according to Take Back the Night’s website.

Marywood was one of the locations chosen this year.

According to Marywood’s website, both Marywood and the University of Scranton were chosen by the Take Back the Night Foundation because of each schools’ commitment to raising awareness and preventing sexual assault.

“We were chosen along with the University of Scranton as one of the 10 Points of Light, so this is our event for that,” said DiMaria.

Students from the University of Scranton, another location chosen for the 10 Points of Light, also attended the presentation at Marywood.

Nicole Lasota, a senior sociology major at the University of Scranton, said this topic needs to be recognized at universities.

“The more this topic is discussed, the more it’s a part of the every day conversation,” Lasota said.

Some student athletes said they felt this presentation should not have been mandatory.

“I feel like it should be made optional,” said Michelle Thompson, senior athletic training major and lacrosse player. “People will make a joke out of it.”

“Athletes are held to a higher standard,” said Smith. “We go out of town and represent Marywood.”