Students from Marywood abroad during series of ISIS attacks 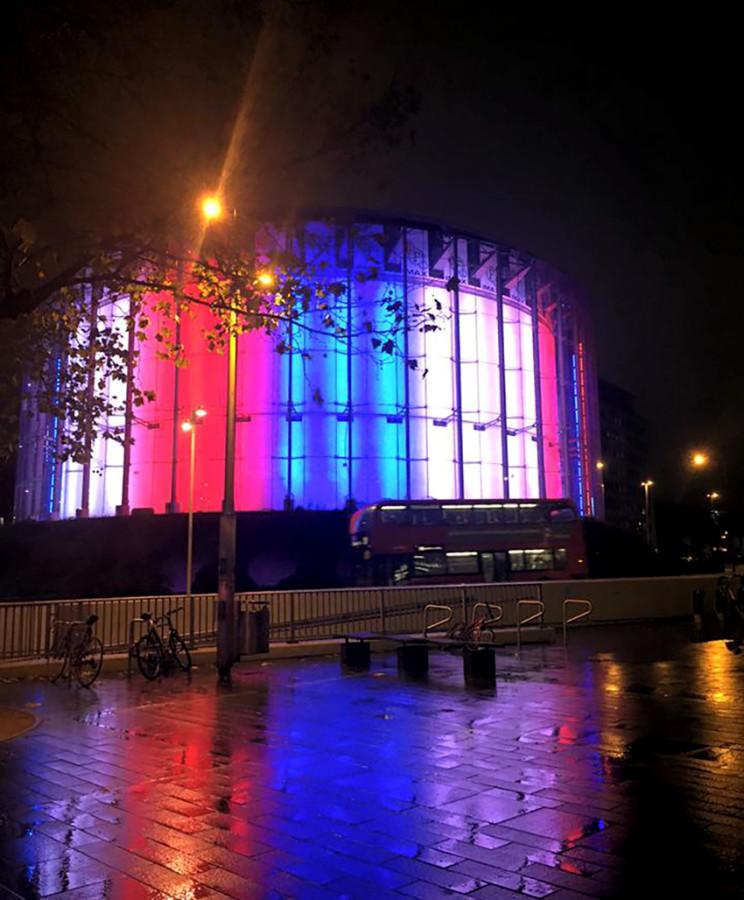 The BFI IMAX theater in London was lit up in Paris colors to show their support after the attacks on Nov. 13.

On Friday, Nov. 13, an explosion outside of a soccer match at the Stade de France at 9:20 p.m. began a night of attacks on Paris, France. According to CNN, suicide bombers made their way around five other locations in the city, including two restaurants and the Bataclan concert venue. The New York Times reported that more than 100 people were killed as a result.

Two Marywood students studying abroad this semester were in Paris when the attacks there occurred that Friday. Maryrose Evanella, a junior criminal justice major, was meeting Gabby Creazzo, a junior graphic design major, in Paris to visit and explore the city. Evanella traveled from Rome, Italy, where she is currently studying abroad at John Cabot University. Creazzo came from London, United Kingdom, where she is studying at the University of Westminster.

“At my school, classes are not held on Fridays, which allows for long weekends, and I have used many of those weekends to travel around Europe,” Evanella explained.

Both students were in their hostel around 10:20 p.m. when they heard word of the attacks going on around Paris.

“Immediately I was pretty shocked and a bit scared.” said Evanella.

Creazzo said she felt the same way, and she also worried about her family not knowing right away if she was safe or not.

“There is kind of that feeling in your stomach that you just get and it doesn’t go away,” Creazzo said.

Despite the confusion and shock, both students remained safe in their hostel until things calmed down. They stayed inside until Saturday afternoon per orders of President François Hollande, and then went to a park while remaining cautious of their surroundings.

“We didn’t want to stay in the hostel all day and let the fear that the terrorists created totally ruin our weekend,” said Evanella. “That would mean they won,”

Evanella and Creazzo were able to return to Rome and London fairly smoothly with the addition of military and police monitoring the airport. Evanella said that one her professors back at John Cabot gave the students a chance to openly discuss what had happened that night.

“I was able to share what I experienced and it was really nice to talk about it with other people, since I had really only told people about it over text message or on the phone,” said Evanella. “I’m still in a bit of shock and the severity of the situation hasn’t really hit me yet, but I thank God that my friends and I were safe and I got back to Rome without any issues.”

Both Evanella and Creazzo are feeling safe back in Rome and London and are looking forward to enjoying the rest of their semesters.

“Maryrose and I both handled it the best that we could, but now that I am back, I really just want to enjoy the time that I have in London and studying abroad.” said Creazzo.

Senior philosophy major Melanie Speakman has also been studying abroad this semester at King’s College London. She is saddened at the attacks, but like Evanella and Creazzo, she is carrying on and not letting fear ruin her time abroad.

“One of the friends I’ve made here in London is from Paris,” said Speakman. “Her words perfectly sum up the general attitude I’ve observed: The French people love life. The terrorists want us to live in fear. The best way we can fight is to love life even more.”