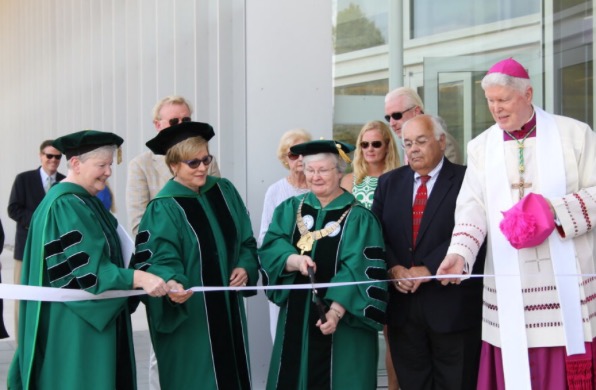 On Monday of this week, Sr. Anne Munley, I.H.M., Ph.D, President of Marywood University, announced that this semester would be her final one in her post as president. Her final day as president comes on June 30 of this year.

The announcement of Sr. Anne’s retirement comes just slightly more than two months after faculty took a vote of no confidence in her leadership.

Sr. Anne made her announcement in a set of letters sent to the Marywood community, one to students, and one to employees. In both letters, Sr. Anne stated that the decision came after “deep thought, reflection, and prayer.”

In the letter to students, Sr. Anne reflected on some of the accomplishments of the Marywood student body that she is particularly proud of.

“Our students have been recognized year after year as leaders, competition winners, academic achievers, and dedicated employees—as innovators and artists, scientists and political scientists, musicians and speech pathologists, social workers and writers, actuaries and digital media experts, psychologists and sociologists, teachers and scholars—all of whose talents have been nurtured and developed by outstanding faculty, talented in their own right,” Sr. Anne said in her letter to students. “And all have been imbued with the unique gift of Marywood service—a vital component of a hope-filled future.”

The memo to Marywood employees echoed many of the same points, but also laid out seven points to be accomplished this semester.

Before the end of the semester, Sr. Anne stated that all of the following will be worked on: the finalization of the Middle States accreditation self-study; the identification and action on the next steps in the financial stabilization process; the completion of Larry Goldstein’s Strategic Resource Allocation process; continued work on shared governance; the projection of realistic enrollment goals; the creation of goals for a new committee focused on inclusion; and the transition to a new president.

Ann Henry, Ph.D, chair of the Board of Trustees, issued a statement via a press release from Marywood about the search for a new president.

“The Board of Trustees will be announcing in early February the plans for a comprehensive national search to recruit and select the successor to Sister Anne,” Dr. Henry said.

“Sister Anne has been an outstanding leader and visionary for Marywood University,” Dr. Henry said. “Our entire Marywood community is grateful for her guidance, her commitment to our students, and her passion for education in the Marywood IHM tradition.”

Dr. Henry has not responded to The Wood Word’s request for comment.

According to a page on Marywood’s website regarding the retirement, Sr. Anne became Marywood’s 11th president in 2007.

In her tenure as president, Sr. Anne worked through both high points and controversies at Marywood, including the opening of its School of Architecture, the loss and subsequent regaining of accreditation for the nursing program, and the various stages of the Learning Commons project.

Sr. Anne has not yet responded to The Wood Word’s request for comment regarding the announcement of her retirement.