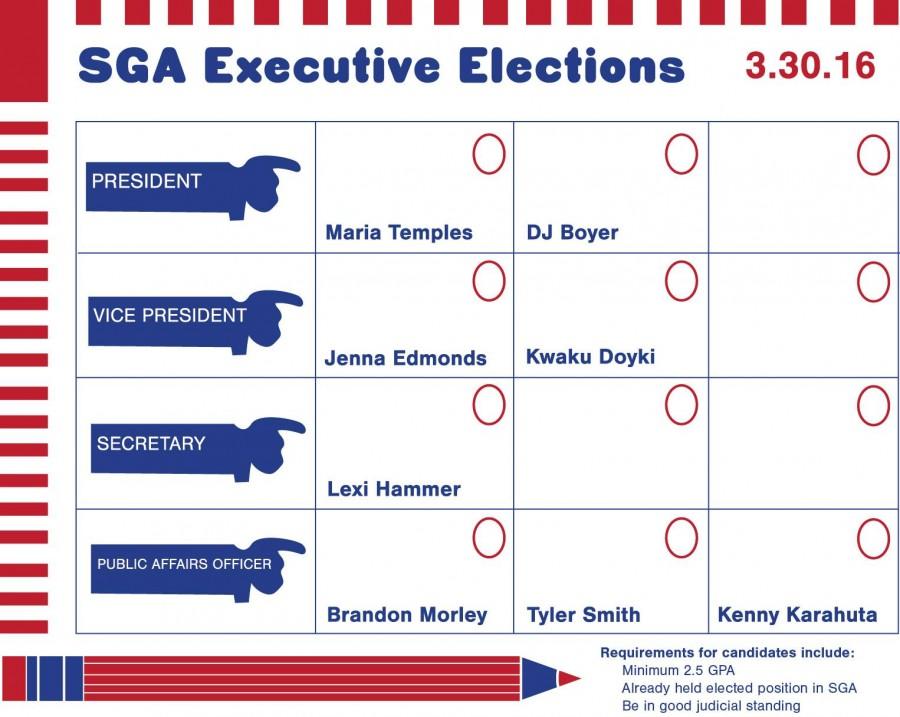 Along with changes in the Marywood administration for the 2016-2017 school year, there will also be changes in Marywood’s student government.

Elections for Student Government Association (SGA) executive positions will be held on Wednesday, March 30 from 8 a.m. until midnight. All full-time undergraduate students except graduating seniors will receive an email with a link to the ballot through SurveyMonkey.

The executive positions being voted on are president, vice president, secretary and public affairs officer. The head of senate will not be voted on until the fall semester so that members of the incoming freshman class can be included.

“We’re running because we think we are extremely dedicated to SGA, and we’re experienced student leaders,” said Edmonds. “We think we are going to do a lot for SGA and the campus as a whole.”

Temples said that if elected, she and Edmonds would talk more with students and make sure their concerns are addressed.

“We really want to work on transparency,” added Temples. “With the new president [of Marywood] coming in we really want to work with him or her to create a better Marywood and to make all of the students very happy and make student life just a little bit better on campus.”

“I think that’s a lot of opportunity for Student Government to really build some new relationships, maybe mend some bridges and really make some headway in areas that they haven’t been able to in the past.” said Frieler.

Frieler shared the characteristics she believes good student leaders need to have when running for a position.

“They need to listen to others’ opinions.” she said. “Being president is a very selfless position because you’re listening to other students’ concerns and they might not necessarily be your concerns.”

Outgoing SGA President Melissa Kowalski reflected on her year in the position and hopes that the progress made by SGA continues next year.

“I think students have always been passionate,” said Kowalski. “But this year we really got a lot done, and we had a lot of challenges to overcome. A lot of sensitive topics came up, especially last semester.”