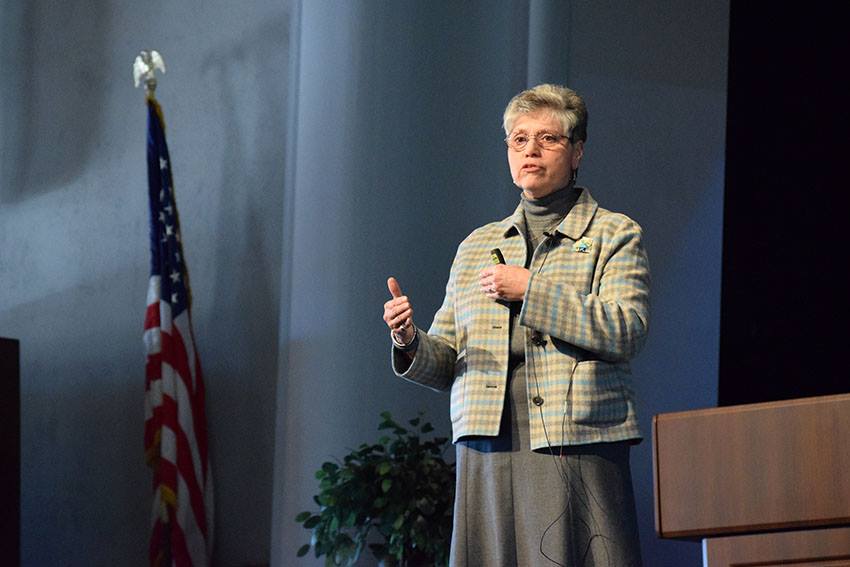 Sister Mary Persico speaks to the Marywood community in the Sette LaVerghetta Center for Performing Arts on April 5.

During a campus visit this past week, Marywood’s newly-named president outlined her vision for the institution, saying she wanted Marywood “to be the most sought after university in northeast Pennsylvania.”

Prior to being chosen as Marywood’s 12th president, Sr. Mary Persico, IHM, Ed.D. spoke with various members of the university community as a finalist candidate. She was named to the post by the Board of Trustees on Friday.

On Monday, April 4, Sr. Mary met with administrators, faculty, staff, students and alumni in four separate sessions. The following day, Sr. Mary participated in both an additional faculty session and an open session that anyone could attend.

Sr. Mary concluded her visit with a presentation to all members of the Marywood community.

On the first day of Sr. Mary’s visit, she spoke with students and answered questions in a student session held in the Comerford Theater.

Sr. Mary said in her presentation that she was once a student at Marywood and feels education makes students influential individuals in the world.

Sr. Mary added that she wants to ensure students are receiving the education they want and need.

“I want Marywood to be the most sought after university in northeast Pennsylvania,” said Sr. Mary during the session.

Sr. Mary said she will make herself present and available on campus if students want to speak with her. She stressed the importance of attending sporting games, concerts, and other fine arts events to show her support for students.

Sr. Mary also discussed with students her goals for Marywood including strategies to increase enrollment.

“We need to figure out what is going to make us competitive,” Sr. Mary said. “We have to think of different ways to deliver education.”

She proposed changing the way some courses are offered to make them more accessible for students. One of the solutions includes adding more online classes, specifically for non-traditional students.

Sr. Mary said it is important to acknowledge the comments and concerns of the student body.

“If we’re a community, then everybody gets to have a say,” she said.

Vinelys Mendez, a junior nutrition major, said she obtained a lot of information from the session.

“I thought it was informative,” Mendez said. “I have a lot of hope for the future.”

Other students had similar reactions. Tanya Harty, junior criminal justice and sociology double major, said she enjoyed the questions from students and thought those who attended made up a representative group of different majors.

“I liked how students were able to get questions answered,” Harty said. “To get to know the prospective president is a good idea.”

Rebecca Lukasak, junior biotechnology major, said she thought having Sr. Mary come and speak to students was a great opportunity and liked the candidate’s personality.

“When she didn’t have an answer, she was honest,” Lukasak said.

On April 5, Sr. Mary held a campus presentation open to the entire Marywood community in the Sette LaVerghetta Center for Performing Arts.

Sr. Mary explained that she focuses on three specific areas, which she calls lenses, when envisioning Marywood’s future. The three lenses include an organizational lens, a relational lens and a symbolic lens.

“Marywood in the next five years needs to have a strategic plan,” said Sr. Mary. “We need to be strategic and competitive or we will be left out compared to other programs.”

Within this area, Sr. Mary said she would like to focus on providing students with more online programs and developing niche programs, such as the veterans program already established at Marywood.

She added that she would like to use alumni to help market Marywood and provide a university that will “reflect the society in which we live.”

Sr. Mary said she is aware of the fiscal problems Marywood is facing and hopes to solve them.

“[I] hope to say to the chair of the Board we have a balanced budget,” said Sr. Mary.

According to Sr. Mary, the relational lens embodies the amount of trust within an institution.

Sr. Mary said that the Marywood community needs to build trust before making decisions when using the shared governance model.

“When we walk about on this campus or wherever else, people should say ‘we trust what’s going on at Marywood,’ ” said Sr. Mary.

Sr. Mary compared these three lenses to those used by an eye doctor. She said similar to an optician testing someone for their prescription, you have to keep trying multiple lenses until you have a perfect vision.

“You can’t make any decisions if you’re working with one lens,” said Sr. Mary.

In an interview after the campus presentation, Board Chair Dr. Ann Henry said it was good to hear the different perspectives of faculty, staff and students and hear what concerns members of the Marywood community the most.

“I’m very happy with the attendance and the questions asked,” said Henry.

In a separate interview, Sr. Mary said she felt welcomed when she arrived at Marywood and feels like she never left the university.

“I feel that everyone has been extremely open, welcoming, honest and supportive, so I feel that I’m in touch with the Marywood I’ve always known and loved,” said Sr. Mary. “The people here are just terrific.”

According to Sr. Mary, her main focus as president will be to represent the people who make up the Marywood community.

“I would like to bring a spirit of oneness and the energy of a new second-century Marywood and openness to the broader community,” said Sr. Mary.

In an interview after the campus presentation, James Gavin, treasurer of the Board of Trustees, said the presentation was wonderful.

“I love the vision,” said Gavin. “I loved the part about commitment to diversity and the population at Marywood.”

“[She] truly conveyed the mission of the IHM and Marywood,” said Sr. Ellen.

Sr. Fran Russel, IHM, Ph.D, and associate professor of education, also attended the campus presentation. According to Sr. Fran, Sr. Mary “is the one.”
“She has the talents, the skills, the ability to heal the Marywood community,” said Sr. Fran.

“I was favorably impressed,” said Johnson.