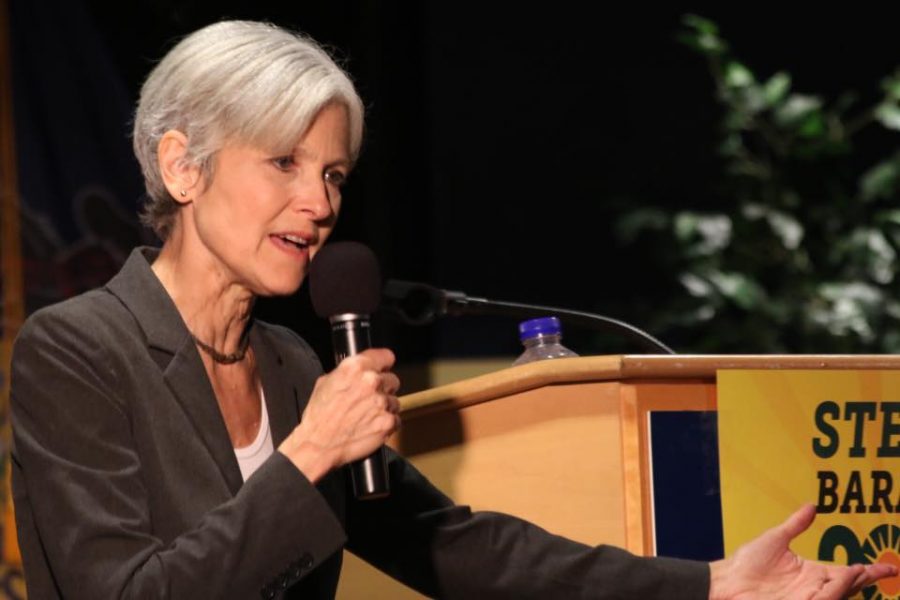 According to David Ochmanowicz, member of the steering committee of the Green Party of Pennsylvania and chair of the Bucks County Greens, Stein came to Wilkes University as part of her college tour.

“There are no major party candidates out there who speak for this large swatch of society and here we are, [a] physical representation of our discontent with the major two party system,” said Ochmanowicz.

The program included a line-up of speakers who addressed the crowd before Stein took to the stage. Speakers included Carl Romanelli and Gabriella Romanelli, both members of the Green party; Jay Sweeney, who is running for state representative in the 117th district; and YahNé Ndgo, an advocate for the Stein campaign.
As a young woman who attended Wilkes University, Gabriella said “students don’t want to choose between the lesser of two evils” when referring to Democratic Presidential candidate Hillary Clinton and Republican Presidential candidate Donald Trump.

Ndgo addressed the matters of social justice during her speech. She talked about the need for hope, the Black Lives Matter movement and “break[ing] the status quo.”

“We are activists. We have to fight for each other,” said Ndgo. “[We have to] stand firm with the movements that matter.”

Carl asked supporters to chant “go green Jill Stein” and “Jill not ‘Hill’” as Stein waved the peace sign and took the podium.

“We really do have the power to transform the election in real time,” said Stein.
Stein discussed her involvement in protests against the Dakota Access pipeline, which cuts through a Native American reservation and transports oil from North Dakota to Illinois.

Earlier this month, Stein spray-painted a bulldozer in protest of the construction of the pipeline. According to Stein, police have a warrant for her arrest for vandalizing and trespassing.

Stein said she thought spray-painting the equipment was “the most useful thing” she could do.

Stein emphasized the importance of providing reasonably priced education for college students during her speech.

She said if the government bails out the “crooks” on Wall Street who caused the bad economy, it is now time to bail out students who owe money in student loans.

According to Stein, our world is in a “climate emergency” and a possible way to solve this emergency is to create a healthy and sustainable food system.

In addition to helping the world’s climate, Stein said if she is elected, one of her first acts of office will be to remove certain drugs from the illegal drug lists.

“Marijuana is a dangerous substance because it’s illegal,” Stein said.
Stein added that it is “time to put an end on the crisis of fear, violence and racism” in our country.

According to Stein, the current election is a race to the bottom in which the other campaigns rely on fear.

“It is a race to the bottom between the greater and the lesser evil,” said Stein.

Stein said that voters should not cast a vote against their own values.

She concluded her speech by saying if she is elected as president, she will turn the White House into the “Green House.”

Attendee Amanda McCarthy of Susquehanna County said, “I thought it was really nice that [Stein] came to a small town like Wilkes-Barre and was able to speak on things that are happening here locally.”

Gabriella Romanelli, who spoke before Stein’s speech, said she was “over-the-moon” after hearing Stein speak.

“Jill talked about … how they [Democrats and Republicans] run a campaign of fear and intimidation and I think that that’s because they realize that our generation, especially the young people, our minds are changing,” said Gabriella.

Ndgo explained how she stands behind Stein, who “is speaking on behalf of the majority of citizens in the country and people around the world.”

“I think it’s really important for people to hear someone who’s resonating with them, particularly during this election, and to understand that they don’t have to choose evil,” Ndgo said.