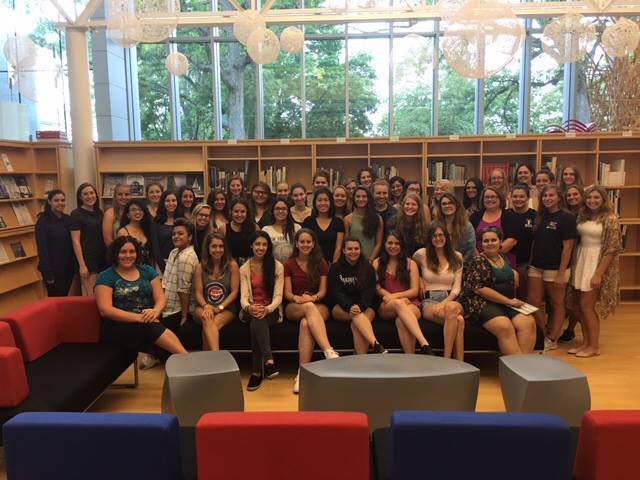 The women in the Architecture Department are organizing to raise awareness.
Students and faculty came together to form the Women in Architecture chapter at Marywood at the beginning of the Fall 2016 semester. According to fifth-year architecture student and President of the chapter Carly Bosignore, this chapter isn’t nationally recognized, but this student-run organization has recently been gaining attention at different universities, such as the American Institute of Architecture and Harvard.

The chapter has the intention to empower female architecture students, especially by teaching them to stand up for themselves and have a voice in the male-dominated field.

The School of Architecture welcomed both the National Organization of Minority Architects and the Women in Architecture Chapter simultaneously, and the two are working closely together for now. In the future, however, these two chapters will become separate organizations with separate representatives.

“Even though things have improved over the years, the equality between men and women still doesn’t exist,” said Shamanna.

She explained that despite these improvements, the field remains dominated by men, with women often having to speak up to have an impact and “make their presence felt.”

According to Shamanna, this chapter is not limited to female architecture students alone.

“I want a lot of the male members of the school to attend meetings or events because they need to be aware that these are issues that women are going through,” Shamanna said. “The point of these organizations is not about targeting certain groups of people. It is about empowering everybody.”

The chapter will be holding a meeting for the first time over the course of the next couple of weeks.

The chapter will soon define a cabinet, solidify its representatives and outline specific goals. After becoming settled in their role in the School of Architecture, the chapter can begin reaching out to the community and potentially involve other design majors.

Carly Bonsignore, a fifth year architecture student, said her hopes for this chapter include “having more opportunity for mentorship with professors and other colleagues in the building.”

She also said she hopes the group will be able to reach out to the community and architecture firms in the area and “receive support in return.”

Brianna Kuperavage, vice president of the Marywood chapter and fifth-year architecture student, said she has high hopes for this club.

Kuperavage said she hopes this chapter will offer the opportunity to network and offer newer students “support to continue in a profession that is a bit more dominant by men right now.”

Shamanna said she wants Women in Architecture to become a platform for women to be able to speak up, where senior students, faculty and other speakers will be able to mentor younger students.

Ultimately, Shamanna said she hopes that this club will help “give these women a voice, help them speak up and tell them that they have nothing to be afraid of.”