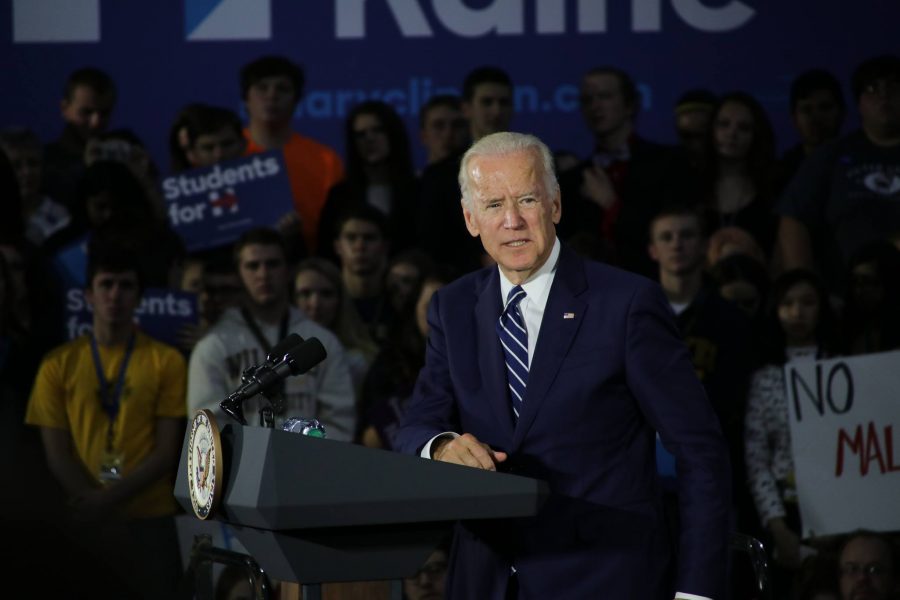 Biden spoke after a series of introductions and heavily criticized Donald Trump for his comments about women.

“Think of the abuse of power that has been exercised by the Republican nominee… what he said, he did, and does is the textbook definition of sexual assault,” said Biden.

Biden brought up Trump’s comments about what he can get away with because of his celebrity status.

Trump claims he can get away with sexual assault because “when you’re a star, [women] let you do it.”

“What a disgusting assertion for anyone to make,” said Biden.

Biden’s voice and energy rose after bringing up Trump’s comments, as he transitioned into talking about the middle class.

“Think about the things that matter to you; a job, being treated with dignity. Think about whether or not you’re able to live a middle class life,” Biden said. “My definition of middle class is not a number…it’s an ideal.”

Biden spoke about how the middle class is important to the economy.

“If the middle class does well, the wealthy do very well, and the poor have a way up,” said Biden.

A central theme in Biden’s speech was his father and his childhood. He told the audience about how his father left Scranton to pursue jobs in Delaware when the economy started to tank in the 1950s.

Biden ended his speech by telling the crowd that the country’s achievements are “not because of Barack Obama and Joe Biden, but because of who we are as a people.”

“We are the most powerful nation in the world,” said Biden. “We always rebound. We will own the finish line this year and in this century.”

He also pointed out that if Katie McGinty wins the senate race, she would be the first female senator from Pennsylvania.

Katie McGinty used her time on stage to call out Trump as a fraud and a disgrace, referencing his controversial Trump University.

McGinty also brought up Trump’s attitude toward women and talked about how his campaign has no plan to benefit veterans.

Senator Bob Casey stepped up to the mic after McGinty and spoke to the crowd about the Obama administration’s achievements. Like McGinty, Casey also criticized Trump.

“If I had to summarize what [Trump’s] candidacy is all about,” said Casey, “it’s about four words: fear, smear, demonize and divide.”

Casey spoke about the Achieving a Better Life Experience (ABLE) Act, which benefits disabled Americans. The ABLE Act was introduced to Congress by Senator Casey and Republican Congressman Ander Crenshaw from Florida.

Casey invited Sara Wolff of Moscow, who herself has Down Syndrome, to speak about her time as an advocate for the ABLE Act.

Wolff introduced Biden at the end of her speech, and mentioned a time when he hosted a group of ABLE Act advocates at The White House. Wolff told the audience how Biden spoke to an eight-year-old girl at the event.

“He gave her a stuffed animal, held her hand, and said, ‘Everyone is entitled to be treated with dignity and respect,’” Wolff said.