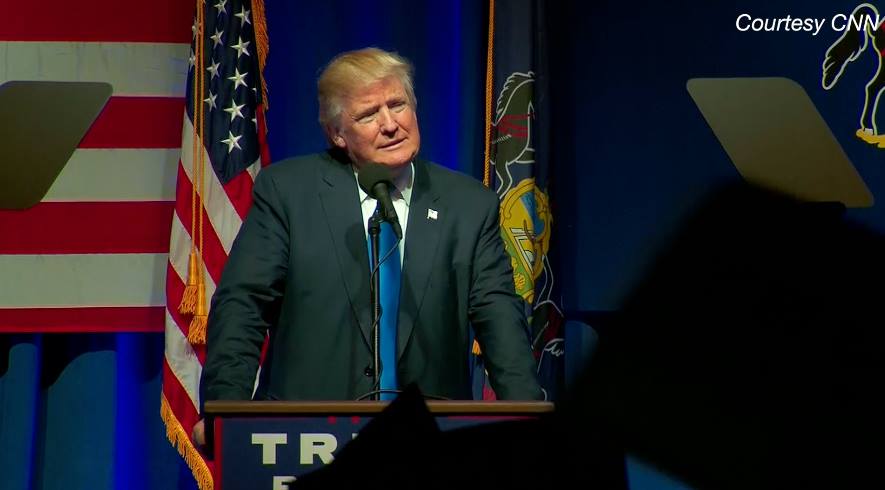 Republican Presidential candidate Donald Trump made one last visit to the Scranton area before Americans cast their votes.

Trump held a rally at Lackawanna Community College on Monday, Nov. 7 at 5:30 p.m.

Trump’s campaign stopped in Scranton because Pennsylvania is a battleground state. The campaign announced the event on Nov. 5, only a few days before the rally.

The Wood Word applied for press credentials to attend this event but were denied because of lack of space.

According to the email, “with the abundance of requests for media credentials, we have to take proactive measures with our credentialing process to ensure the success of each event … due to various venue sizes, media space, and safety we must limit the number of credentialed media and give priority to our national and local outlets.”

Trump’s stop in Scranton was one of five stops on Monday. He also visited states Flordia, North Carolina, New Hampshire and Minnesota.

“[He] couldn’t have picked a better time to come,” said Matt Catanzaro, a Marywood University freshman majoring in graphic design, who also has attended all of Trump’s rallies in the surrounding area.

Outside the rally, the crowd was filled with a mix of Trump and Clinton supporters.

Lenora Martucci Johnson of Whitehall, PA attended to support Trump. She said that she does not believe Clinton will represent America’s women, and Clinton is not a good role model to young girls.

“We need a strong woman. She stayed with Bill Clinton after everything that happened when he was in the White House,” said Johnson. “She berated those girls, the young ones that he slept with, and made it all their fault … She had every opportunity to show she was strong on her own, and she didn’t. She took the easy way out, and that is wrong to teach our young girls.”

But not everyone was a Trump supporter. Abigail Tirador of Bloomfield, N.J. drove to the event to voice her disdain for Trump.

“I just don’t get how people could vote for Trump with the comments he makes,” said Tirador. “Hillary will represent women. She’ll represent all of us. Trump will not.”

Trump supporter Ed Winkelbauer of Schuylkill Haven, P.a. said it is important for Americans to vote on Tuesday, Nov. 8.

“I think it’s important to vote, for everyone to get their voice out, especially younger people,” Winkelbauer said. “It’s good to see younger people involved because … it’s your voice … toward the future of the country.”