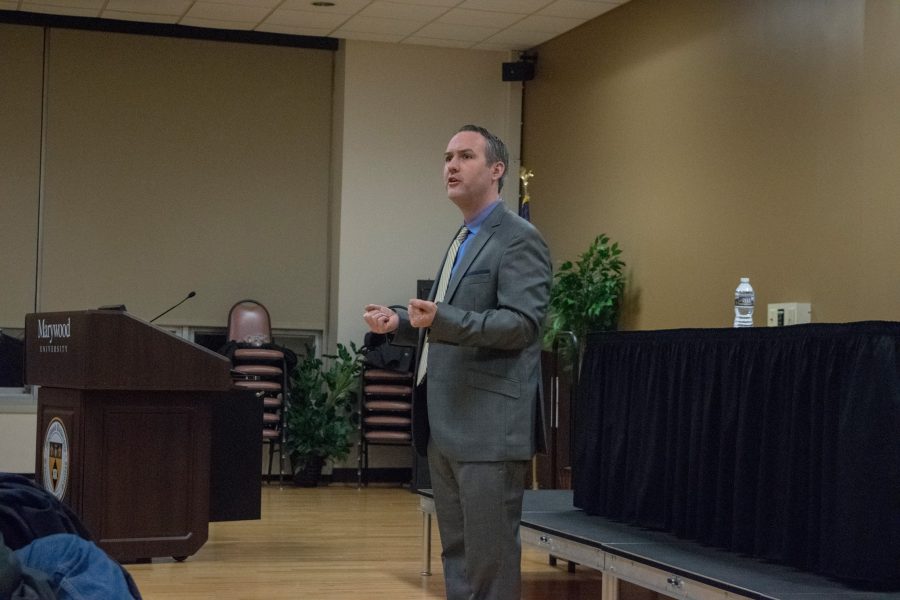 Marywood University hosted the “Heroin Hits Home” presentation for the university and the public on Jan. 30 to bring awareness to the number of heroin overdoses in Lackawanna County.

Lackawanna District Attorney and host of the presentation Shane Scanlon said his “Heroin Hits Home” organization presses this issue to make the public more conscious of the epidemic.

In his presentation, Scanlon discussed how working in the district attorney’s office influenced him to begin the campaign.

According to Scanlon, from 2014 to 2016, the amount of deaths from overdoses increased from 35 to 115 with 488 drug arrests by the Lackawanna County drug task force.

“I’ve watched this [the overdose issue] explode,” said Scanlon during the presentation. “It is as simple as we are trying to save lives.”

According to the Heroin Hits Home webpage, Lackawanna County Coroner Tim Rowland said “every three days someone dies from an overdose in Lackawanna county.”

“We as society have to deal with this,” Scanlon said. “I sit up here [at presentations] and I see how you can pick out the people who have someone in their home battling with this addiction right now.”

Heroin addiction deals with shame, according to Joseph Kane, a recovered drug addict and clinical administrator at Clearbrook Treatment Centers.

“Shame is what addiction feeds off of…and once [the disease] gets you to feel that way it is easier for you to use,” Kane said.

As a recovered drug addict, Kane discussed why he continues to inform and help others who may be hurting from addiction.

“I do this stuff because I want to see people get well,” Kane said. “Where else do you work where people come in hopeless and you turn them around and make them hopeful?”

Attendee Jason Mandicott, a junior criminal justice major, said he thinks a university in the center of Lackawanna County should address the use of drugs.

“The biggest thing I took away was how big the problem actually is, not just in the United States, but within our own county itself,” said Mandicott. “We have many different cultures, many different backgrounds and you don’t know who suffers from what… I think to try and spread that message on campus is a good tool.”

As both Scanlon and Kane continue to spread the word to other schools, they encouraged students to help inform the public.

“No matter how far the steps, we are still moving forward,” said Scanlon.