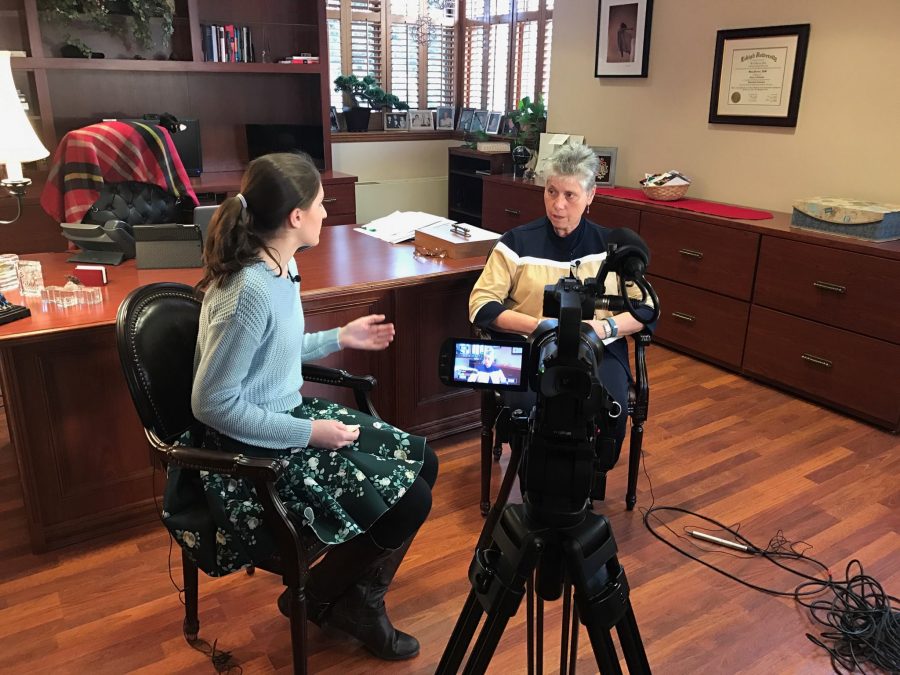 We sat down with Sr. Mary Persico to talk about her progress as president of Marywood.

“The first semester was interesting,” said Marywood President Sr. Mary Persico, IHM, Ed.D. “There were so many things happening that it’s kind of like a blur…although I think we did accomplish a great deal.”

In the fall 2016 semester, Sr. Mary Persico told The Wood Word her main goals as the new university president included increasing enrollment at the university and increasing community involvement.

Now in her second semester as president, Persico explained how she met her goals from the previous semester.

Persico said that recruitment efforts have increased in an “all hands on deck” approach.

Faculty and coaches have also reached out to students in various ways, according to Persico.

She added that the university continues to look for international students, as they add to the culture and diversity of the university.

“Whatever we can do to get them [international students], we’ll do it,” Persico said.

Another of Persico’s first-semester goals was to increase community involvement. There has not been a significant change in community interaction, she explained, but once the amphitheatre is built, she said she is hopeful it will invite the larger community to Marywood.

“Once [the Learning Resource Center is] down, depending upon our funding, we can either move right into building the amphitheatre, or we may have to wait a little bit until we get the funding. We’re aggressively going after the funding, and I’m hopeful that we’ll have it and we’ll be able to just do that so that by spring of 2018, it’ll be up and ready to go,” Persico said.

Persico said that the additions of Dr. Susan Turell as provost and Tammy McHale as vice president of business affairs were positive changes, but the campus experienced a difficult period with the release of the Strategic Resource Allocation (SRA) reports.

“I think we seem to be over that, for the most part, and we’re starting to build some momentum here at Marywood,” Persico said.

The final SRA report included a list of programs to be phased out and introduced a series of studies to examine certain areas of the university, including the core curriculum.

Persico said she sees the study of the core curriculum as a positive for the university.

“I think a big push in this curricular study is to help us to understand how to help our students to support their professional and pre-professional studies with the core values that are going to help them to integrate their lives and their professions,” she said.

Another change laid out in the final SRA document was a restructuring of the university’s colleges from four to three. Persico said the restructuring will allow for better alignment of the colleges. The final decisions, she added, will be a result of a dialogue between administration, faculty, staff and students.

Persico talked about the qualities she believes a leader should have, whether leading a country or leading a university.

One final attribute a leader should have, Persico said, is the ability to help people “develop their fullest potential as human beings.”

“I think a leader always should love his or her people and build them up, because building people up, in my opinion, is one of the greatest things we can do for other people,” Persico said.

Kaitlyn O’Meara contributed to this article.