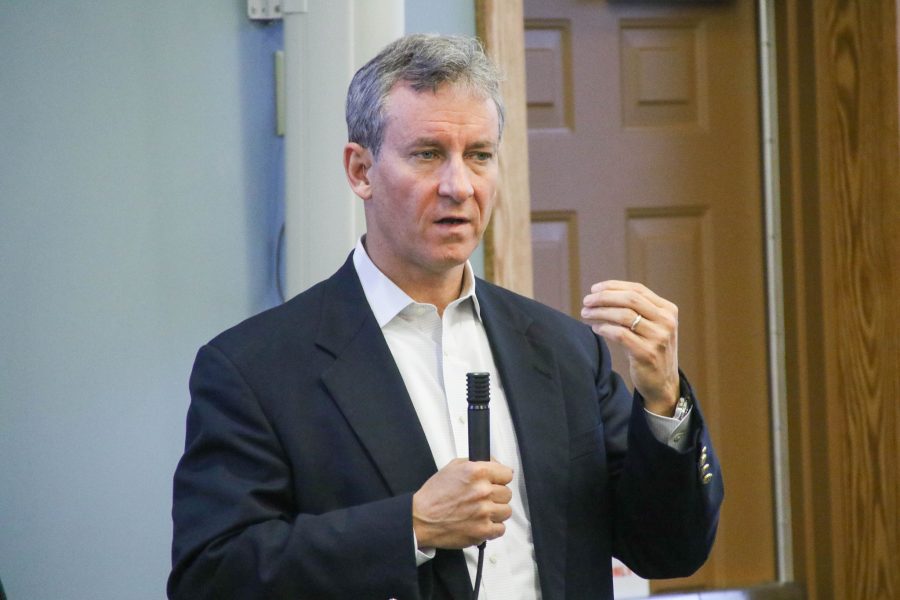 Cartwright began the town hall by discussing the services his office provides, which include services for veterans and military affairs, IRS and tax services, citizenship and immigration services, social security programs and Medicare services.

Attendees of the town hall wrote down questions on pieces of paper that Cartwright answered throughout the evening.

Cartwright answered the first question which asked about the current mood in Washington D.C.

“There’s a lot more friendliness and friendship going on in Washington than you see,” said Cartwright.

He added that there is more bipartisanship than many think and said some of his closest friends are Republicans.

“The mood in Washington is not as bad as you think. I am personally rooting for Donald Trump to find his footing. He’s made a lot of very tall promises and I’d like to see him keep them,” said Cartwright. “I would like to see Donald Trump come through with his promise of a trillion dollars on American infrastructure because that is the kind of thing that will put a lot of our people to work right here in northeastern Pennsylvania.”

Cartwright continued to discuss President Trump’s budget plans and said it doesn’t include any spending on infrastructure and includes cuts to everything but defense spending.
Another constituent asked Cartwright a question about redistricting.

“One of the big problems with governments these days is the gerrymandering, so you have these districts that are very deeply Democrat or very deeply Republican and what that means is you end up with … representatives who disagree with each other on everything,” said Cartwright.

He added that he believes both Democrats and Republicans are guilty of gerrymandering districts and said the solution to fixing this is by regulating state to state.

On the topic of healthcare, Cartwright said he is a supporter of the Affordable Care Act because he thinks it strengthens hospitals and helps healthcare providers. He said if there was a single-payer healthcare plan, he would vote for it.

Cartwright said he strongly disapproves of President Trump’s pick of Betsy DeVos for Secretary of Education.

“Education is the most important tool that allows upward mobility through the classes in our country… you need somebody in there who believes in public education,” said Cartwright.

Cartwright shared his thoughts on immigration reform and said that he believes President Trump is on the right track “in one dimension, but it is not a single dimension issue.”

“It does make sense to build a wall in places where there is rampant disregarding of the international border,” said Cartwright.

According to Cartwright, there are 11 million undocumented immigrants who are working and not paying into social security and the Medicare system.

“Comprehensive immigration reform is so important because I want to make taxpayers of these people,” said Cartwright.

“I enjoy answering questions and I’m not afraid to tackle any issue even if it’s something I think the majority of people are against me on,” said Cartwright. “I went to Congress to stand up for the things I believe in and to tell the truth about what I believe in and what I will vote for … I think people appreciate the honesty and the effort that goes into putting these town halls together.”

Congress is back in session as of Monday, April 24. According to Cartwright, the first thing to tackle when he returns to Washington is to work with other members of Congress to lift the debt ceiling.

Alex Weidner contributed to this article.