The Wood Word • May 15, 2017 • https://www.thewoodword.org/news/2017/05/15/date-confirmed-for-library-demolition-amphitheatre-construction-pending/ 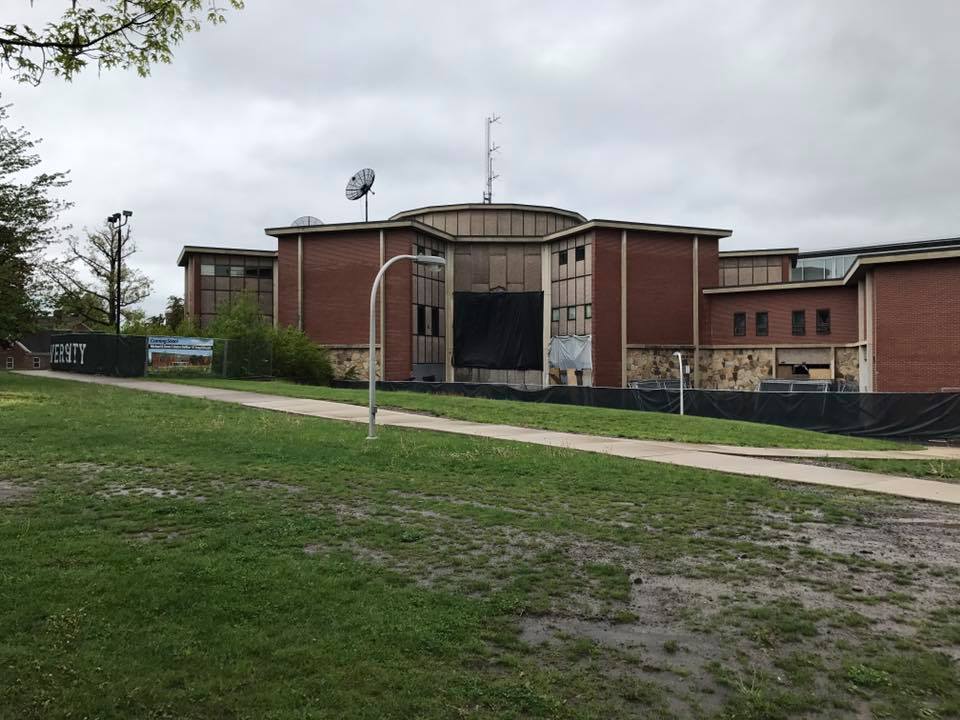 The Learning Resources Center demolition will start after graduation.

The demolition of the Learning Resource Center, Marywood’s former library, will begin during the week of May 22 following the Ninety-Ninth Annual Commencement Ceremony.

According to Wendy Yankelitis, vice president for buildings and grounds, the area will be fenced off on May 15. Weather-permitting, Yankelitis said the demolition process should take five or six weeks.

The demolition, which will take the building down and bring everything up to grade with city standards, will cost $300,000, she said.

Due to a lack of funds, the construction of the Michael and Gwen Calabro Delfino ‘47 Amphitheatre planned to replace the Learning Resource Center will be delayed, according to Patrick Castellani, controller and assistant treasurer.

“Right now, that’s the only plan… just to tear it down and bring it back to grade, plant some grass,”
Castellani said. “The amphitheatre, when funds are available for that, that’s when that’ll be tackled.”

He said the university received monetary contributions for the amphitheatre, including a $200,000 gift from Michael J. Delfino and some smaller donations, but “nothing substantial at this point.”

According to Marywood President Sr. Mary Persico, IHM, Ed.D, the university does not officially possess the $200,000 donation from Delfino because the gift is “contingent upon his death.”

She said the university secured funding for the demolition from fundraising efforts throughout the year and the amphitheatre construction will be planned at a later date.

“We’ll see how we are with our funds after we demolish this building, see if we can use upfront funds and then replace them when we get them at a later time,” Persico said. “So that remains to be seen yet, but we’ll figure that out and we’ll do it in the best interest of the university and of our community here.”

Additionally, a proposal has been put together by the university for state funding, according to Castellani.

Castellani said the estimated cost of the amphitheatre construction will be around $300,000, when considering additional expenses that may arise in the process. For now, he said, the demolition of the Learning Resource Center is the main priority.

“Our game plan is that by the time you come back in the fall, the place looks nice again,” he said. “The building’s gone and we might not have a lot of grass, but at least it’s aesthetically pleasing to look at.”